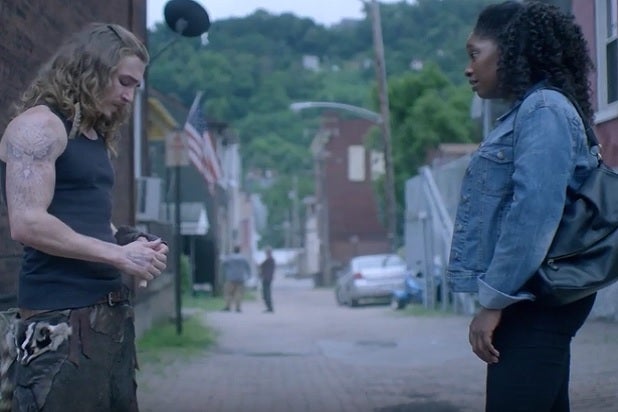 (Spoiler alert: Do not keep reading if you have not seen the Season 2 premiere of “Outsiders”)

“Outsiders” Season 2 wasted no time, throwing the world of the Farrells into major turmoil right off the bat with a major death. But first…

The episode begins with an epic battle on Shay Mountain. Wade (Thomas M. Wright) and his deputies are set upon by the whole clan, who are killing them without mercy.

But suddenly, Wade snaps out of this dream and finds himself in a hospital. He learns that when the Farrells appeared, he ran away, fell, and broke his arm and knocked himself out.

Back on the mountain, G’winn (Gillian Alexy) is put to the test as the bren’in immediately, with the whole clan divided over what to do about the coal company. She orders everyone to remain on the mountain from here on out, which only causes more strife.

Series creator Peter Mattei told TheWrap that this season G’winn has finally gotten the leadership role she wanted, but she is going to have to deal with repercussions.

“In Season 1, she starts out as this very sweet, earnest healer,” Mattei said. “Then she gets involved in a love triangle and chosen to be Big Foster’s wife. And then with him getting shot at the end of Season 1, she becomes the bren’in. All this happened to her passively. In Season 2 she’s the one making a lot of choices and suffering the consequences of those choices.”

Later, she tasks Little Foster (Ryan Hurst) with tracking down the body of Big Foster (David Morse), which has disappeared. He searches the mountain for signs of the body, eventually running across a hunter from the outside world. The man says he respects the Farrells and offers Little Foster a ride into town to see if his father’s body is in the morgue.

G’winn goes to the prison box to confront Asa (Joe Anderson), only to learn that someone slipped him the key and set him free. We see Asa wandering into town, disposing of everything that marks him as a Farrell along the way.

At the sheriff’s station, Wade is dismayed to find Haylie Grimes (Francie Swift) back to her usual tricks, making nice with Matt Myers (James McCauley), an emergency manager dispatched to Blackburg by the governor. He and Wade clash immediately, as Wade feels Meiers is in town solely to aid the coal company.

Hasil (Kyle Gallner) defies G’winn’s orders and travels down to Blackburg in order to find Sally-Ann (Christina Jackson). He tries to apologize for all that happened, but she isn’t having it. She tells him she wandered lost on the mountain for two days because of him, lost her job, and never wants to see him again.

Later, we see Sally-Ann at home in her bathroom crumpling up the box for a pregnancy test. She looks at the test sitting on the sink, which is positive. She goes outside in a panic, only to find a small wooden bird Hasil carved for her sitting on her front steps.

Elsewhere in town, the hunter who offered Little Foster a ride needs to stop off at a bar to visit a friend. While the hunter is inside, someone recognizes Foster as a Farrell and a fight ensues. Foster dispatches his assailants easily, but then Wade arrives to break things up, taking Foster into custody.

At the station, Wade questions Foster about the murder of his brother-in-law, Breece Dobbs. Foster tells him that it was his father, Big Foster, who killed Breece, but that Big Foster is himself now dead and that it was Asa who killed him. Wade decides to keep Little Foster in custody, since a group of townspeople are waiting outside for him.

We catch up with Asa again. It is now nighttime and he smashes a window of the local hobby shop, taking all the money out of the cash register. As he does so, G’winn is awoken by a strange vision that encourages her to have her bren’in coronation ceremony that very night.

Asa makes his way to the rail yard, where he is confronted by the three wolves we first saw with him at the beginning of the series. Just as G’winn is officially made bren’in, the wolves tear Asa apart, killing him.

And the reason for killing off the character? Mattei summed it up succinctly: “It’s always good to surprise the audience and keep them on their feet.”

Also Read: 'Salem' to End After 3 Seasons on WGN America

The episode ends as we follow a woman through a dilapidated house. She heads down to the basement with a bowl of soup, where Big Foster is lying on a bed nearly unconscious but alive.

“Outsiders” Season 2 will air on Tuesdays at 9 p.m./8c on WGN America.