Activision said YouTube viewership hit a season high, with a peak of 180,000 viewers tuned into the live broadcast of the finals match last week.

An increase in viewers was expected this year since esports teams are unable to hold in-person competitions and pack arena seats. This year Activision ran the majority of Overwatch League competition virtually, including the finals, which saw players competing for a $1.5 million prize pool. 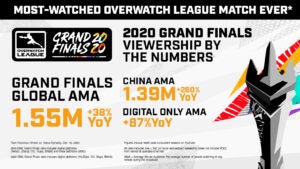 The Overwatch League held its inaugural season two years ago, and the first-person shooter title from Blizzard Entertainment was released in May 2016. Last year’s in-person event attracted about 10,000 fans, Activision said.

“I’m so proud of the entire Overwatch League staff who worked incredibly hard to put on a great show for our fans, and we’re extremely proud to finish this season with 38% global viewership growth from last year,” Activision Blizzard’s vice president of Overwatch esports John Spector said in a statement Tuesday. “YouTube is a great partner for us and our viewership in Asia was massive as Grand Finals ran live in prime-time for those audiences, which was great to see.”