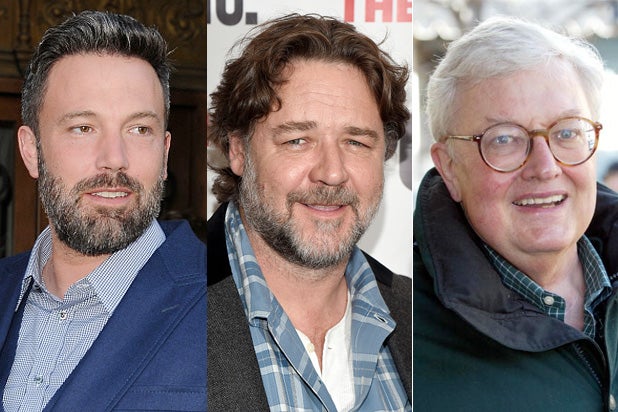 There’s always a chance to meet celebrities at festivals, but the question is: Can you have a genuine encounter? As opposed to one of those hey-I’m-a-big-fan/what-are-you-working-on? conversations that can thrill you when you’re 25, but that you begin to realize isn’t all that different from a photo op with a star at a Golden Globes dinner. It certainly helps if the celebrity in question isn’t quite a celebrity yet.

At a Miramax cocktail party at Sundance in 1997, I was besieged by the genial smart-aleck grin of an actor I’d seen in one or two middling movies but had barely even registered. His name was Ben Affleck. I couldn’t help but be drawn into the conversation, because the first thing he told me is that he and his buddy, Matt Damon (who I’d met once briefly years before, also pre-fame), were big fans of mine.

I’d grown used to being flattered, especially at Miramax parties, where Harvey Weinstein always found a way to amble up to me and growl out something like, “How’s the best critic in America?” I liked Harvey, I enjoyed his huckster shamelessness, and I even appreciated his ass-kissing, but I always knew, of course, that I was being played, mostly because when you looked at Harvey, the two eyes that stared back at you were jarringly different from each other. One was wide open and looked right at you, and the other just about squinted shut and seemed to look right through you. That, I decided, was Harvey’s gangster eye.

Affleck, on the other hand, was all easygoing sincerity, so I indulged myself in a conversation that rather amusingly treated me as if I were the bigger star. Ben told me that he and Matt were fixated on one line I’d written. Reviewing “Disclosure,” the 1994 Michael Douglas/Demi Moore sexual harassment thriller, I’d said: “We know the face, by now, almost too well. The glittery charmer’s eyes, the long hair swept back with rakish panache, the mouth whose corners bend down into a pout of cold rage — it’s Michael Douglas under siege again, battling to save his job, his marriage, his sexual honor. Fight on, beleaguered white man!” Ben and Matt relished that “Fight on, beleaguered white man!”

Affleck told me that they said it to each other all the time. I adopted it as well: From that point on, Ben and I became friendly, talking at length whenever we ran into each other at a premiere party, and our version of a high-five was “Fight on, beleaguered white man!” Ben was always brimming with highly articulate and informed opinions, just as he is on “Real Time With Bill Maher,” but after I got to know him, I had to review a lot of bad Ben Affleck movies, like “Forces of Nature” and “Reindeer Games,” and in writing about them, I admit that I probably did take that 10 percent off my fastball. I would pan the movie, but maybe go a little easy on Ben. I couldn’t help it; I felt for him.

The truth is that I always wondered how this guy who was so quick, sharp, and engaging in person could come off as such a cloying doof on screen. I decided that he was too analytical to be a truly good actor (which was probably why he liked to gamble so much — to liberate his left brain), but then, when he became a director, it all finally made sense. That’s what he was meant to do. Behind the camera, he even figured out a way to liberate his extra-rational quick-brain energy on camera.

If Affleck, the tall kid next door, was someone I never had to feel a trace of intimidated awe around, it was quite the opposite the night I went out drinking with Russell Crowe. He showed up at Sundance in 2002 with “Texas,” a tiny sliver of a documentary about the rock band he was in, called 30 Odd Foot of Grunts. After 20 years as a critic, I’d grown used to thinking that no movie star was ever going to have the kind of pure idol-worship effect on me that the fabled actors from my youth did–De Niro and Pacino, Travolta in “Saturday Night Fever,” or Mickey Rourke. But then I saw “Gladiator.” I thought — and still think — that it’s the single greatest movie star performance of the last 30 years.

Ever since the dawn of Eastwood, Bronson, and Bruce Lee (followed by their steroidal cartoon heirs, Stallone and Schwarzenegger), a great deal of movie culture has been ruled by the righteous heroics of mad-dog vengeance. The telegraphed aggression, the snarl of resolve, the perfect line of dialogue (“Well, do ya, punk?” “You’re luggage!”) that dispatches an enemy as if the very words were a lethal weapon. Russell Crowe, in “Gladiator,” was in many ways the apotheosis of these men. The difference is that he portrayed the brusque brutishness in three dimensions. He gave it heft, tragedy, soul.

He was the ultimate thinking man’s badass, channeling lightning bolts of clenched fury into how Maximus would stare at Joaquin Phoenix‘s Commodus and say, without so much as raising his voice, “The time for honoring yourself will soon be at an end.” (Translation: I would like to scrape your eyeballs out with my thumbs.) Now, here I was with Russell Crowe. Was I man enough? Sorry, but this is the sort of thing that runs through your head. Or at least mine.

I figured that things would be okay as soon as he ordered a bottle of white wine instead of beer. Crowe, who had his girlfriend with him, the petite blonde Danielle Spencer (whom he married the next year, and who never said a word the whole night), took me to a music bar on Main Street, and we were ushered into the back, where we guzzled several bottles for a few hours.

He was a true Aussie, with an aggressive but corny sense of humor (it was like hearing British rim-shot jokes made with a bigger drumstick), as well as a touchy-feely buddy camaraderie that I wasn’t at all used to. At one point I had a piece of lint on my sweater, and when he noticed it, he reached across the table to flick it off, something that no guy in the United States would ever do. There was something cool about the gesture; it said, “We’re dudes, we’ve got to look out for each other.” He called people “Mate” and was quite cordial, answering all my pesky questions about “Gladiator,” and talking, with more than a hint of ruefulness, about how challenging it was even for him to find roles he really liked.

At one point, I did get a glimpse of the feral, short-fused Crowe who was not quite yet the stuff of telephone-tossing legend. The bar that night was featuring a special musical entertainer: Russell Hitchcock, who was one-half of the soft-rock duo Air Supply, who were also from Australia. So the choice of venue hadn’t been an accident. Hitchcock decided that it would be fun to have Crowe join him onstage to sing “I’m All Out of Love,” and he dispatched the manager of the bar to ask him. Crowe waved off the request, but then the manager came back, now making the mistake, in his clueless Park City rube way, of trying to pressure Russell Crowe into getting up on stage.

Crowe’s brow lowered, his look hardened into an ice-pick glare, and when he said, “I’m not . . . going to do that,” it was with an unsettling “Back the fuck off ” vibe (I would like to scrape your eyeballs out with my thumbs), the steam starting to come out of his ears. It wasn’t acting, but it was no mere reckless display of temper either. It was why Russell Crowe was a movie star.

People tend to reveal themselves when they get angry. I learned a lot about Roger Ebert during one overheated run-in I had with him standing on line for a movie at the Toronto Film Festival in 2000, the year of “Almost Famous.” It had been close to a decade since I met Roger, and I often ran into him at festivals, where our chats were friendly, but there was a competitive gleam to them.

Roger was used to dominating conversation, and was more than happy to be thought of as the most bombastic person in the room — but he didn’t seem to realize, when he was shooting opinions my way, that my big-dick critical ego and ability to talk anyone in earshot under the table (and maybe even drive them nuts in the process) was as huge as his.

We started to talk about “Almost Famous,” which Roger thought was unquestionably the movie of the year. Since I loved it as well, I thought we’d find nothing but common ground. But I happened to mention that a lot of people at Entertainment Weekly didn’t like the movie nearly as much as we did, because they thought it viewed the early ’70s, especially the drug scene, through rose-colored glasses. I told Roger that I thought they were too young to know how accurate the film really was: Back then, cocaine hadn’t really exploded yet, and the movie’s mellow booze-and-dope vibe caught the mood of the time exactly.

That’s when Roger fixed me with one of his testy glares and said, “So what if it isn’t authentic? Who cares? It’s still a great movie.”

I thought: Really? I said to him, “I don’t agree with that at all, Roger. I do think it’s a great movie, but if it didn’t capture the period so authentically, I wouldn’t like it half as much. That’s actually the key to what’s great about it.”

To my surprise, Roger dialed up the outrage. “That’s nonsense!” he declared, his voice rising to high dudgeon. “You’re treating it like it’s a documentary. It’s the emotions that carry it.”

I could tell this was going nowhere. “Almost Famous” was an entrancingly emotional film, but to me the emotions were rooted in reality, and that was its glory. In a fluky way, though, this movie-line debate explained Roger Ebert to me. He seemed to possess a world-class bullshit detector, but when he was in a movie theater, authenticity really didn’t matter to him as much as . . . well, as much as it mattered to me. To the point that he could champion “Almost Famous” yet verge on loving it for the wrong reasons.

Owen Gleiberman is an American film critic and the author of the memoir "Movie Freak." He wrote for The Boston Phoenix and is best known as the founding movie writer for the then-startup Entertainment Weekly, where he was a critic for 24 years. Gleiberman continues to write for BBC.com and lives in New York City with his wife Sharon and two daughters.