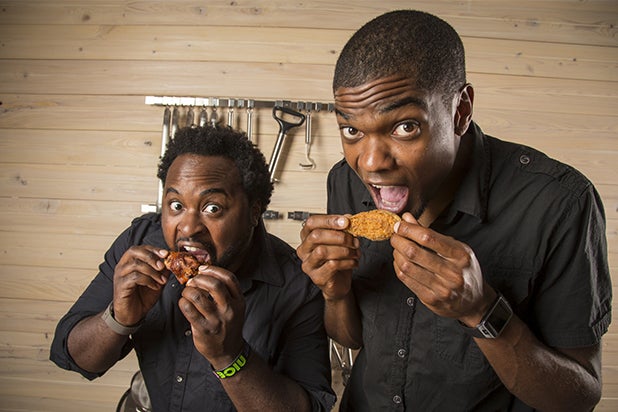 OWN ordered a new eight-episode docu-series Tuesday, “2 Fat 2 Fly.” The show centers around two friends who run a Southern food truck and will begin airing in 2015.

The show stars best buds and entrepreneurs Ramone Dickerson and Corey Simmons, who run a Columbia, S. C. food truck with an interesting specialty — chicken wings stuffed with crazy ingredients like jambalaya and mac & cheese. Dickerson and Simmons’ wings are well enjoyed by the community, but the series shows the two of them struggling with turning that demand into a profitable business.

Oprah Winfrey‘s network first aired a sneak peek of the show on Saturday, Aug. 16, though it was then operating under a different name. According to OWN, the show was number one among ad-supported cable programs in its time slot for the African-American women 25-54 demographic. The network later changed the title to reflect the name of the friends’ fledgling wing business.

“This series will be a great addition to our Saturday primetime lineup,” said Erik Logan, OWN president. “The escapades of these two best friends are fun to watch and there seems to be no limit to what they might do in their quest to make their business a huge success.”

OWN was previously home to Lindsay Lohan‘s controversial 2013 docu-series “Lindsay.”

The network, which is a joint venture between Harpo, Inc. and Discovery Communications, debuted Jan. 1, 2011 and can currently be seen in 85 million homes.