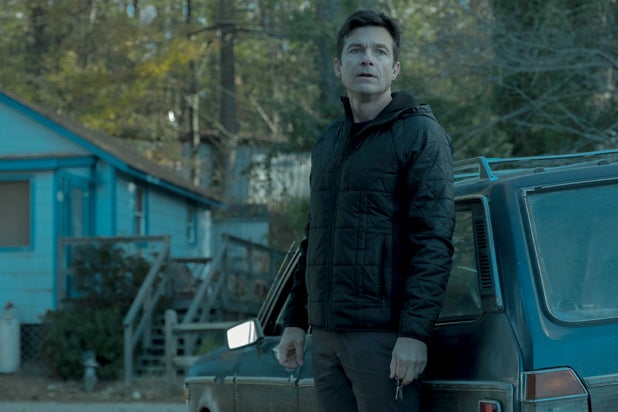 This story about Jason Bateman and “Ozark” first appeared in the Down to the Wire issue of TheWrap’s Emmy magazine.

Two seasons into Netflix thriller “Ozark” and we’re still not entirely sure who is the most at fault for the fractured marriage of Marty Byrde (Jason Bateman) and Wendy Byrde (Laura Linney). That kind of balance, which begins with the writing and is projected skillfully through the actors — and Bateman’s lens as a director on the series — is exactly why we’re getting antsy for Season 3.

“It’s great that it’s not black and white,” Bateman said. “That it’s not good vs. evil or villain vs. hero. That’s the satisfying takeaway from our show, and that’s what gives you the anxiety, that there’s a level of tangible and relatable conflict and confusion.” (Check mark on that whole “anxiety” thing for us.) “You recognize that you might be saddled with the same type of push-pull based on mistakes.”

Bateman’s Martin Byrde is a mild-mannered financial planner and an upper-middle-class family man from Chicago who moves his wife and kids Charlotte (Sofia Hublitz) and Jonah (Skylar Gaertner) to the Missouri Ozarks. He’d actually be a pretty boring guy to lead a series, if not for that whole money-laundering-for-a-drug-cartel thing that prompted the move.

It’s a setup that could have easily become cliché, had the writers made Byrde into some sort of secret action hero. Thankfully, that’s definitely not this show, which received a total of nine Emmy nominations for the 2019 season, including Outstanding Drama Series, as well as nods for Bateman (as both actor and director), Linney and co-star Julia Garner.

“There’s not a ton of explosions and effects and overt violence in the show,” Bateman pointed out. “Hopefully, what is unsettling about it is that it’s humanity pushed right to the edge of what you’re capable of justifying.”

Also Read: Mandy Moore Says 'This Is Us' Season 4 Starts With Unexpected Twist 'Analogous to the Pilot'

They’ve occasionally got guns, but the pen is mightier from the writers room to the screen. “Marty and Wendy, they’re smart people,” he said. “So they’re not going do things that as an audience member you’d say, ‘Oh, that’s stupid. People would never do that.’ You can’t really get away with taking a shortcut from a narrative standpoint.”

EmmyWrap Down to the Wire 2019