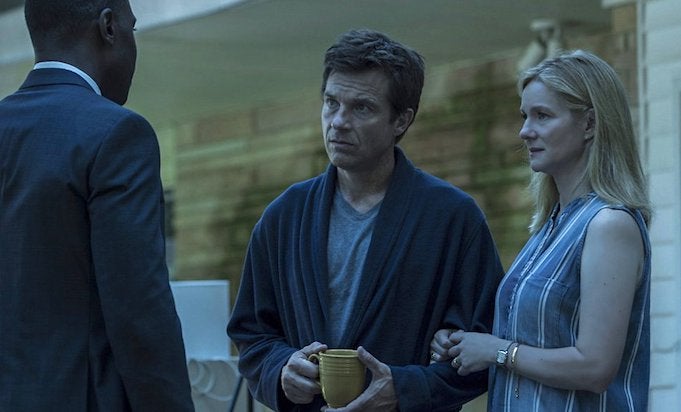 Hurry up. You still have a shot at being an early adopter of the best new series on Netflix — one that, so far, is criminally underrated given its darkly addictive lure.

Jason Bateman (who also executive produces and directed four episodes) stars as the brainy Marty Byrde, a financial adviser in Chicago who finds himself neck-deep in a money laundering operation for the Mexican drug cartel. Laura Linney plays his wife, Wendy, whose charm and savvy helps get Marty and their family out of more than a few potentially deadly situations.

The couple flee to the Missouri Ozarks on a last-chance scheme to save themselves — and their son and daughter — from painful deaths at the hands of of Del (Esai Morales), Byrde’s cartel boss.

Each episode plunges deeper and deeper into gut-wrenching insanity as the Byrdes miraculously, narrowly escape demise at every turn.

“Ozark” dropped on Netflix last week, and yes, we watched all 10 episodes, which run roughly an hour each, give or take.

Don’t let tepid reviews fool you. “Ozark” currently has a 66 percent on Rotten Tomatoes — but lest we forget, “Breaking Bad,” which “Ozark” is being compared to, wasn’t an instant critical or fan hit either.

Also Read: 31 Worst Sitcoms of All Time: From 'Mama's Family' to 'Coupling' (Photos)

We dare you to watch the first three episodes and not get completely hooked.

Here are the nine craziest and most disturbing moments from the first season, which you may want to check out only once you’ve viewed it (huge spoiler alert!):

1. Co-worker killings
Without totally spoiling it, let’s just say Marty has to endure the sight of his colleagues being murdered right before his eyes, and more than once.

2. Eyeballs
They come up twice — no pun intended — in the season. And yes, they’re the human variety, the ones the cartel has gouged out.

3. Bad dreams
Marty and Wendy’s daughter, Charlotte Byrde (Sofia Hublitz), struggles for air as she takes a swim to de-stress. Luckily she survives after sinking to the bottom of the lake momentarily — and dream sequences on the show suggest the scene represents her inner turmoil as opposed to an actual life-or-death scare.

Marty has bad dreams too — and audiences don’t immediately know that the trauma being played out on screen isn’t real.

4. Gobs of cash
At one point, $50 million gets stuffed inside an easily-removed lake resort room wall. For being so smart, Marty isn’t very good at hiding the dough he’s responsible for laundering.

5. A boy and some bowels
Marty’s tween son, Jonah (played by the talented young Skylar Gaertner), develops an obsession with vultures and the dead prey they seek and then disembowel.

6. Son with a gun
Once Jonah, along with his sister Charlotte, learn what their father really does for a living, he discovers the violent, murderous ways of the cartel in online videos. Next chance he gets, he stashes guns and learns how to use ‘em .

7. Deadly garbage truck
A real estate agent who Wendy’s been working with quarrels with his annoying mom. Said mom backs up into the street as she argues back at him and — boom! — hit by a garbage truck.

8. Mom-less newborn
Thankfully the show only alludes to the killing of a pastor’s very pregnant wife. But given the fact that he has a new baby and no mom in sight — and that powerful local heroin growers had promised to rip the baby from the mother’s womb if things didn’t go their way — our imaginations are left to envision the terrible scene.

9. Apparent infant drowning
Yes. It’s unbearable to watch the pastor (Michael Mosley) push his baby under water — even when the tyke is finally pulled from under water, gasping for air, in what audiences learn is a baptism, after all.

Note to parents: Never hold your baby under water that long.