The Season 3 premiere day of Netflix’s “Ozark” more than tripled the average-minute audience for its second season, according to Nielsen.

Not only has the show gained some steam since then, it’s practically now law to stay home and watch Netflix.

Through its opening weekend, “Ozark” Season 3 viewership only went up from there. See its 10-day averages — and sum total — below via a handy Nielsen chart. 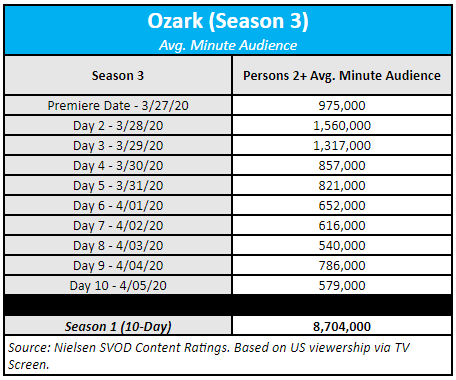 The only “Ozark” Season 3 viewership number released by Netflix at this point is a projection forecasting “29 million member households will have chosen to watch this season in its first four weeks.”

Netflix famously holds viewership numbers close to its vest. Equally as famous is the discrepancy between the way the streaming company and the TV ratings currency company calculate a “view.”