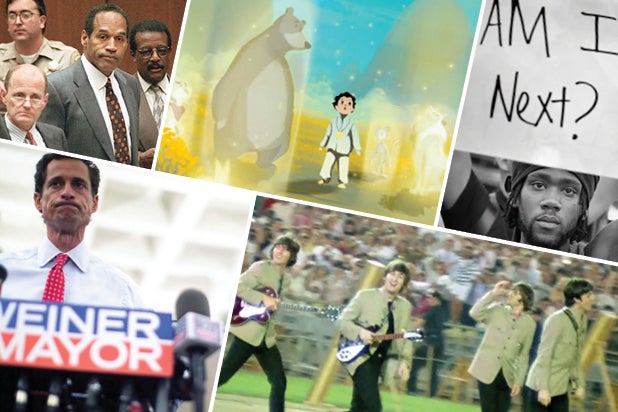 A near-record 145 documentaries have qualified for the 89th Academy Awards, the Academy announced on Friday.

The record for the Oscar documentary race was set in 2013, when 151 films qualified. Last year, 124 documentaries met Oscar requirements, which include theatrical runs in Los Angeles and New York, and reviews in the Los Angeles or New York Times.

The presumed frontrunners at this point include “Life, Animated,” “13th,” “Gleason,” “Fire at Sea,” “Newtown,” “Weiner,” “Zero Days,” “Tower,” and ESPN’s “O.J.: Made in America” mini-series, which qualified by screening in theaters as a single seven-and-a-half hour movie.

Music documentaries have won in three of the last four years, with only “Citizenfour” breaking the run of “Searching for Sugar Man,” “20 Feet From Stardom” and “Amy.” This year’s music docs include “The Beatles: Eight Days a Week – The Touring Years,” “Danny Says,” “Eat That Question: Frank Zappa in His Own Words,” “Gimme Danger,” “Mavis!,” “Miss Sharon Jones!,” “The Music of Strangers,” “Presenting Princess Shaw,” “The Rolling Stones — Olé Olé Olé! : A Trip Across Latin America” and “We Are X.”

A number of the qualifying films have political themes, including “Weiner,” “13th,” “All Governments Lie,” “I Am Not Your Negro” and “Under the Gun.” But two of the most high-profile political docs of recent months, the liberal “Michael Moore in TrumpLand” and the conservative “Hillary’s America: The Secret History of the Democratic Party,” did not enter the race.

Members of the Academy’s Documentary Branch, which consists of more than 250 people, have been sent screener DVDs of all the qualifying films. Each member has been randomly assigned a number of films that they are expected to watch, although they are free to also watch any of the films not on their list.

Members will then vote for their favorites, with the top 15 vote-getters appearing on a shortlist that will be revealed in December. A second round of voting will be held to choose the five nominated documentaries.

Oscar nominations will be announced on Jan. 24. The list of qualifying documentaries:

“The Abolitionists”
“Abortion: Stories Women Tell”
“All Governments Lie: Truth, Deception, and the Spirit of I.F. Stone”
“Almost Holy”
“Amanda Knox”
“Among the Believers”
“Anne Frank Then and Now”
“The Anthropologist”
“Apparition Hill”
“Art Bastard”
“The Ataxian”
“Audrie & Daisy”
“Author: The JT Leroy Story”
“The Bad Kids”
“Be Here Now (The Andy Whitfield Story)”
“The Beatles: Eight Days a Week – The Touring Years”
“A Beautiful Planet”
“Beauty Bites Beast”
“Becoming Mike Nichols”
“Before the Flood”
“Behind Bayonets and Barbed Wire”
“Behind the Cove – The Quiet Japanese Speak Out!”
“Best and Most Beautiful Things”
“The Best Democracy Money Can Buy: A Tale of Billionaires and Ballot Bandits”
“Best Worst Thing That Ever Could Have Happened”
“A Billion Lives”
“Black Women in Medicine”
“Blood on the Mountain”
“Boy 23: The Forgotten Boys of Brazil”
“The Brainwashing of My Dad”
“Bright Lights: Starring Carrie Fisher and Debbie Reynolds”
“By Sidney Lumet”
“The C Word”
“Cameraperson”
“Citizen Soldier”
“City of Gold”
“Class Divide”
“Colliding Dreams”
“Command and Control”
“Dancer”
“Danny Says”
“Defying the Nazis: The Sharps’ War”
“Disturbing the Peace”
“Do Not Resist”
“Don’t Blink – Robert Frank”
“The Eagle Huntress”
“Eat That Question: Frank Zappa in His Own Words”
“Eating You Alive”
“Equal Means Equal”
“Eva Hesse”
“Everything Is Copy – Nora Ephron: Scripted & Unscripted”
“A Family Affair”
“Finding Babel”
“Fire at Sea”
“The First Monday in May”
“Floyd Norman: An Animated Life”
“Francofonia”
“Generation Startup”
“Gimme Danger”
“Gleason”
“Harry & Snowman”
“Hate Rising with Jorge Ramos”
“Holy Hell”
“Hooligan Sparrow”
“How to Let Go of the World and Love All the Things Climate Can’t Change”
“Huntwatch”
“I Am Not Your Negro”
“Indian Point”
“Into the Inferno”
“Iron Moon”
“Ivory. A Crime Story”
“The Ivory Game”
“Jim: The James Foley Story”
“Kate Plays Christine”
“Keepers of the Game”
“Landfill Harmonic”
“The Last Man on the Moon”
“Life, Animated”
“Lo and Behold: Reveries of the Connected World”
“Look at Us Now, Mother!”
“The Lovers and the Despot”
“Magnus”
“Making a Killing: Guns, Greed, and the NRA”
“Mapplethorpe: Look at the Pictures”
“Marathon: The Patriots Day Bombing”
“Marinoni: The Fire in the Frame”
“Mavis!”
“Maya Angelou: And Still I Rise”
“Mifune: The Last Samurai”
“Miss Sharon Jones!”
“The Music of Strangers: Yo-Yo Ma and the Silk Road Ensemble”
“My Love, Don’t Cross That River”
“National Bird”
“National Parks Adventure”
“Never Surrender”
“Newtown”
“Norman Lear: Just Another Version of You”
“Notes on Blindness”
“Nuts!”
“O.J.: Made in America”
“Off the Rails”
“Older than Ireland”
“Olympic Pride, American Prejudice”
“On the Map”
“100 Years, One Woman’s Fight for Justice”
“Our Last Tango”
“Presenting Princess Shaw”
“The Red Pill”
“Rigged 2016”
“The Rolling Stones Olé Olé Olé!: A Trip across Latin America”
“Rooted in Peace”
“The Ruins of Lifta”
“Seasons”
“The Seventh Fire”
“Shadow World”
“Silicon Cowboys”
“Sky Ladder: The Art of Cai Guo-Qiang”
“Solitary”
“Southwest of Salem: The Story of the San Antonio Four”
“Starving the Beast”
“The Syndrome”
“Thank You for Your Service”
“Theo Who Lived”
“They Will Have to Kill Us First – Malian Music in Exile”
“13th”
“This Is Life”
“Tickled”
“Tony Robbins: I Am Not Your Guru”
“Tower”
“The Trans List”
“Trapped”
“Trezoros: The Lost Jews of Kastoria”
“USS Indianapolis The Legacy”
“The Uncondemned”
“Under the Gun”
“Under the Sun”
“Underfire: The Untold Story of Pfc. Tony Vaccaro”
“Unlocking the Cage”
“Vaxxed: From Cover-Up to Catastrophe”
“Voyage of Time: The IMAX Experience”
“We Are X”
“Weiner”
“When Two Worlds Collide”
“The Witness”
“Zero Days”