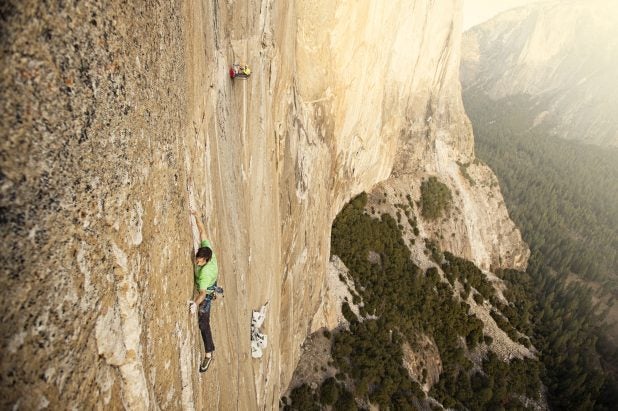 The Dawn Wall of El Capitan in Yosemite National Park gave Kevin Jorgeson the most difficulty during his and Tommy Caldwell’s historic first free ascent of the Dawn Wall on January 14, 2015.

The film, which took home the audience award at South By Southwest, presents an inside look at the historic 3,000 foot climb in Yosemite National Park attempted by American rock climbers Tommy Caldwell and Kevin Jorgeson in January 2015.

“The Dawn Wall” was directed by Josh Lowell and Peter Mortimer, and produced by Red Bull Media House in association with Sender Films.

The Orchard is planning a theatrical release for this fall.

Also Read: Mary Elizabeth Winstead and Common's 'All About Nina' Plucked by The Orchard

“After seven years of filming and another three years of post-production, we are proud that ‘The Dawn Wall’ finally releases in theaters,” Lowell said in a statement. “Tommy took us on this wild climbing adventure with his partner Kevin, and their motivation and drive goes deeper than anything we’ve encountered in filmmaking.”

For Caldwell, however, the Dawn Wall was much more than just a climb. It was the culmination of a lifetime defined by overcoming obstacles. At age 22, he was taken hostage by rebels in Kyrgyzstan. He lost his index finger in an accident shortly after. And when his marriage fell apart, he refocused his life around the goal of free climbing the Dawn Wall.

Also Read: 'Whitney' Cannes Review: Beyond the Bombshells Is a Straightforward Music Documentary

They spent six years plotting and practicing the route, blurring the line between dedication and obsession. And when it came to the final attempt, Caldwell faces a tough question: should he abandon his partner to fulfill his ultimate dream, or risk his own success for the sake of their friendship?

“‘The Dawn Wall’ is a truly incredible story,” said Danny Grant, The Orchard’s vice president of sports acquisitions in a statement. “We couldn’t be more thrilled to partner with Red Bull Media House and Sender Films to distribute it.”

The deal was negotiated by The Orchard’s Danny Grant and CAA Media Finance on behalf of the filmmakers.