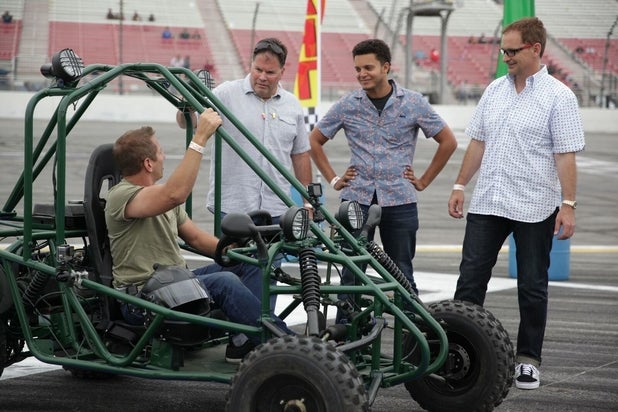 Facebook Watch will soon be home to a new unscripted series from Condé Nast Entertainment.

“Risky Biz,” produced by Condé Nast Entertainment and MAK Pictures, is set to premiere on the video platform on Oct. 21. The eight-episode series, which was inspired by an article in The New Yorker, follows Odds On Promotions owner Mark Gilmartin and contest engineers Will Pemble and Joel Ifill as they conceptualize and weigh the odds of someone winning a contest created by their team.

The Odds On Promotions team designs out-of-the-box competitions such as punching ones way out of a paper bag using novelty boxing gloves, climbing up a slippery set of stairs angled at 60-degrees that’s covered in slime in order to open a treasure chest, and picking a $50,000 cash prize hidden in a stuffed toy where the contestant is the human claw suspended 100-feet in the air. The competitions are typically used at sports events’ halftime contests, holiday retail promotions, weekly casino promotions, county fairs and non-profit fundraising events.

“Facebook Watch is an ideal platform for stories that are community-engaging and shareable, which makes the good-hearted, comedic and competitive nature of this series a perfect fit,” said Joe LaBracio, EVP of Alternative Programming at CondéNastEntertainment. “With CNE’s unscripted television division producing over 100 hours of long-form content for networks and streaming services, we are excited to have the opportunity to create for Facebook, which CNE’s digital division produces for all the time.”

The series comes from CondéNastEntertainment’s unscripted TV team, which is responsible for the Netflix Emmy-nominated series “Last Chance U.” The company also produces Netflix’s “Fastest Car” and “Most Expensivest” with 2 Chainz on Viceland.

Executive producers on the show include Joe LaBracio from CNE and Mark Kadin, Will Ehbrecht and Rob Hammersley from MAK Pictures.

“MAK Pictures focuses on discovering compelling characters and sharing their untold, unforgettable stories on various platforms,” said Kadin, Founder of MAK Pictures. “We take audiences into new worlds, which is exactly what ‘Risky Biz’ does with an energetic and interesting premise that Facebook Watch viewers will want to share with family and friends.”

Check out a sneak preview of the first episode below: