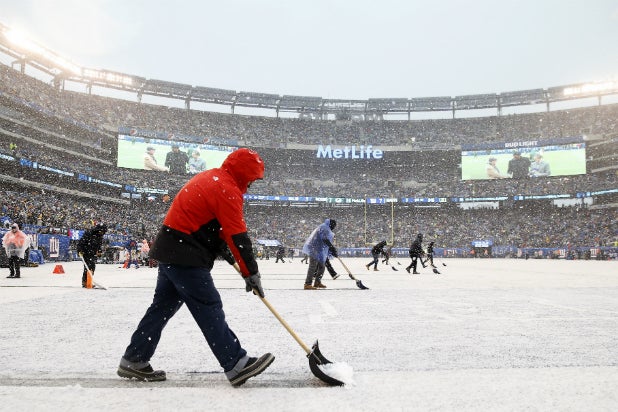 In an understandable attempt to be helpful to TV viewers, Fox is superimposing all of the lines (including the hash marks) and yardage numbers on the MetLife Stadium turf. But that simulated overlay hasn’t jived particularly well with the very real players — especially the white parts of their uniforms.

While Sunday marked the first snowfall of the year in New Jersey and was among the first nationally televised games of the 2019 National Football League season to contend with the white stuff, Fox has actually been doing the same thing for a couple of years now. The faux lines and sidelines are a similar technology to the commonly appreciated yellow first-down line. (Which turns red for fourth down plays. The line of scrimmage is transmitted as a blue line.)

Also Read: 3 Series Each Broadcast Network Is Most Thankful for This Season

We asked a Fox Sports spokesman if today’s brightness or contrast level was set differently than in games past, which might explain why it felt particularly jarring to some. The spokesman responded that it was the “same as always.”

Still, guess how well some members of the Twitter community are taking today’s use? Right.

Read a sample of the social-media griping below.

Dear @NFLonFOX, we don’t need a graphic on the screen to show the yard markers in the snow. It’s annoying. Please stop. You’re overthinking it. Thanks, Stets. #GBvsNYG

The weather is so poor in New York that the TV broadcast superimposed yard lines.

(Also, Aaron Rodgers is still throwing dimes in the snow)#GBvsNYG

@NFLonFOX Fox is superimposing the yard markers on the field. They don’t know their customers at all. We love snow games and would rather see the field completely covered in snow. #GBvsNYG pic.twitter.com/9JL4ceeWxF

Thank goodness for the FOX overlay or we wouldn’t have known that was a Packers touchdown.

Current view of the #GBvsNYG thanks to the geniuses @NFLonFOX pic.twitter.com/G8Xi9QFMMO

#GBvsNYG Fox leave the fake lines off the broadcast please. I would rather not see the lines due to snow than see them across the players bodies.

@NFLonFOX can we get rid of this phantom yardage thing? #GBvsNYG

These superimposed lines in the #GBvsNYG game are messing with my head.

Remember when Leon Lett fumbled away a sure Cowboys victory in ’93?

Turkey, family and football. It's a Thanksgiving trio that's been going strong for nearly a century now. Your first thought when it comes to Thanksgiving football might be simply that the Detroit Lions play -- and lose -- every year, during an otherwise "meh" day of games. But your memory would be deceiving you. First off, the Lions aren't that bad on Thanksgiving, with an all-time holiday record of 37-40-2. Not too shabby. And there have been a fair amount of noteworthy performances, controversies and bloopers on Thanksgiving -- enough to even make a list of 10 memorable football moments without having to resort to including that "Friends" episode where Monica and Ross wrestle over the ball for hours.

Check out our 10 memorable moments below: