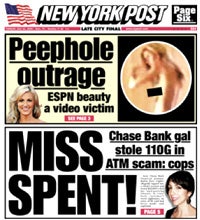 Neel Shah, the former Gawker intern and Radar scribe who has been on the masthead at Page Six for the last few years, is leaving the gossip sheet for L.A., where he’ll be writing for NBC’s "Friends With Benefits" sitcom, per Daily Intel. (He apparently needs a place to live — help him out if you can.)

Shah’s exit comes as the Post is facing a bit of a problem holding onto to talent. Two of the Post’s metro reporters — Lukas Alpert and James Fanelli — are jumping ship to archnemesis and rival Daily News.  That, in addition to “recent prominent departures” noted by Gawker: Maggie Haberman (to Politico), Danica Lo (to Racked), Jay Sherman (to Moody’s), and Justin Rocket Silverman (to Urban Daddy).

According to a pair of reports — one by Gawker, the other by the Village Voice — the exodus is a product of "bullying" by upper management.

Things like this are usually cyclical — in a couple weeks when these positions are filled, we’ll see "Post Staffing Up" stories — but there seems to be more to it than that.

After all, there are those lawsuits (here, here and here) by former and current employees alleging sexism and racism at the paper.