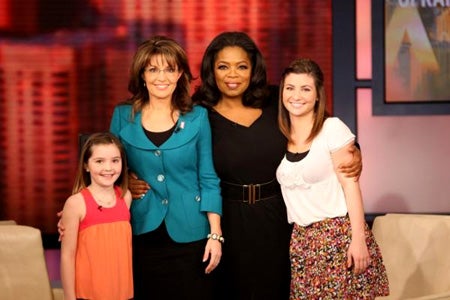 Here are my minute-by-minute, blow-by-blow notes. (Times are approximate.)

4:01PM ET: Palin dressed in royal blue, looking every bit the politician. That is, as much as she did during the campaign. (No flag pin, though!)

4:02PM ET: Oprah gets some housekeeping out of the way, tells Palin that, for the first time “as a private citizen” she endorsed a candidate. (Doesn’t mention “Obama” by name.)

4:07PM ET: First of presumably many, Palin refers to herself in third person.

4:09PM ET: Palin talks about the “haters”: “I was naïve to think that the media would leave my family alone.”

4:10PM ET: When Oprah points out that Obama defended Palin (“Leave [her] children alone”), Palin says, “I said right on.”

4:16PM ET: Palin says she admires Hillary Clinton for what her campaign “probably went through.” (She was talking about Clinton’s selection of pantsuits. Seriously.)

4:17PM ET: “The reason we lost (was) the economy tanked under a Republican administration … I don’t think I (can be) blamed for losing the race.”

Palin: "Must we?!" Then, later: “If people only know me from that interview, I don’t blame them for thinking I was not qualified” to be vice president.

4:36PM ET: Oprah asks about her relationship/thoughts on Levi Johnston. Palin says, "I don’t really want to comment on him," then proceeds to comment on him. Palin: It’s "a bit heartbreaking to see the road" Levi has taken. It’s "not a healthy place to be." Then Oprah rephrases the question, using Thanksgiving dinner as the frame:

4:40PM ET: Video montage of Palin at home in Alaska. Of her workout routine, Palin says: "Sweat is my sanity."

4:52PM ET: Oprah asks if Palin was disappointed she wasn’t able to make one last speech at the McCain concession. Palin says she was disappointed by the reason the campaign told her she couldn’t. "They said VP candidates are not allowed (to talk)."

4:54PM ET: Fifty-four minutes in, Oprah asks what should’ve been the first question.

Oprah: "Have you thought about running for president in 2012?"

Palin: "It’s not on my radar screen."