A rapidly spreading fire in Topanga Canyon has forced around 1,000 residents to evacuate as of Sunday afternoon.

NBC Los Angeles reported Saturday that police are looking for a man suspected of starting the fires.

The blaze was first reported around 10 p.m. Friday evening, and what began as a small brush fire is now roughly 1,325 acres of flames. Officials are using air tankers and all available resources to tame the blaze, which is currently 0% contained — meaning the firefighters are unable to keep the fire from spreading further across Western Los Angeles. LA County Fire Department said in a recent statement the area of Pacific Palisades is basically a tinder box, filled with dry vegetation that “has not burned in 50+ years.”

More than 500 homes and 1,000 people have been evacuate as the fire spreads, LAFD spokesperson Capt. Erik Scott told the New York Times. South Coast Air Quality Management District issued a smoke advisory warning for most of central LA, Northwest Coastal LA County (where the fires are mainly concentrated), and the San Fernando Valley. 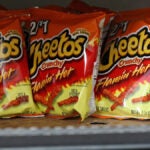 As with many fires in the hills of Los Angeles County, the mountainous terrain makes fighting fires an uphill battle. “Dozers are working to improve access for firefighters on the ground, but much of the area remains inaccessible,” LAFD spokeswoman Margaret Stewart told USA Today. “This is primarily an air-based operation with both fixed-wing and rotary (helicopters) working together.”

Officials say they hope overcast weather expected this week will bring down temperatures and make it easier to curtail the blaze before offshore winds pick up its momentum and bring it up the coast.