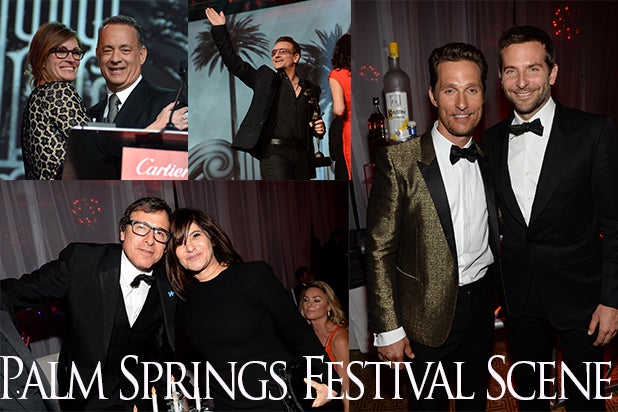 The fourth day of the year, the first major red carpet, and before most of the studios and agencies return to full throttle after the holidays on Monday, awards contenders descended on the Palm Springs International Film Festival’s gala by jet and an armada of Mercedes at the Palm Springs Convention Center for the 25th annual international film festival.

Historically a place to warm up Golden Globes speeches and talking point while campaigning amongst the desert voting constituency in the 909, this year many of the stars reflected the flattery back on fellow actors, producers and studios in the room, championing Hollywood’s creative GDP in 2013. Here’s the top shots and stolen moments from the show and after party in Palm Springs.

Cross-Film Huddle: “12 Years a Slave” breakout Lupita Nyong’o (who brought her “kid brother” with her), “American Hustle’s” Elisabeth Röhm and Amy Adams, “Saving Mr. Banks” and “Captain Phillips” lead Tom Hanks and Darren Le Gallo huddle up in the back room at the Parker at the after party.

“12 Years a Slave” director Steve McQueen has his “+1”, Jeremy Renner makes a sleek arrival, and Tom Hanks reminds everyone that there have been remakes of “Footloose” and “Melrose Place” but not “Back to the Future”.

Hanks, Sandra Bullock, and Bradley Cooper share the love before the show.

“Like everyone else here in the Sonny Bono rec room, at this intimate chicken dinner for two and a half thousand, we all think the same thing when we see Julia Roberts: what a great pair of glasses,” Hanks quipped.

Matthew McConaughey channeled vintage Palm Springs in a gold rat pack blazer. His local fanbase has taste. Amongst the autograph line dwellers stationed outside the convention center at 2:00 p.m., hours before the event, one brought a “MUD” one sheet. It’s the indie jewel in McConaughey’s 2013 crown next to the shinier “Wolf of Wall Street” and “Dallas Buyer’s Club.”

Many of the 2,200 guests are local to Palm Springs, planted across tables numbering in to the 1400’s. After filing past the outdoor-indoor carpet, a human tunnel stretched way past the entrance and in to the ballroom, creating a lookie-loo gauntlet for both celebrities and civilians to walk through. In his first ever trip to the festival, the crowd clapped in Harvey Weinstein as enthusiastically as Julia Roberts.

The official after party at the Parker had a 30 minute peak – Cooper grinning through cell phone photos on the eve of his birthday, McConaughey escorting wife Camila Alves in to the talent hive – before the heat evaporated. Talent disappeared for return trips to L.A. or other after-after parties. The sneaker sporting Palm Springs Film Festival chairman Harold Matzner had the inside line, as his inner circle spread out for an after-after party at the Gene Autry house tucked in to the back of the Parker. The walk-in closets in that place are bigger than all of my friends’ first Manhattan apartments.

McGregor, in the midst of “Mortdecai’s” company move to Los Angeles, told TheWRAP that unlike most of those in Palm Springs, he won’t be at next weekend’s Golden Globes.

Jane Fonda and Alfre Woodard  in the center of the room.

Unlike many awards shows that stack the talent up front, Palm Springs plants the heat smack in the middle of the cavernous convention center. A suspended jib circled above the talent-heavy tables in the 6th and 7th rows.

Hanks chronicled the harmony. “Tonight at table 607, the executives of Walt Disney (for “Saving Mr. Banks”) and Sony (for “Captain Phillips”) have gotten along just fine,” he said while accepting the Chairman’s Award.

Meryl Streep (no after-party) closed the show by accepting the Icon Award. “I don’t feel like an icon,” she said. “Most of the days I feel like I-cahnt. That’s with an ‘a’.”

It would be an early night for some, as Idris Elba, Naomie Harris, Bono, and The Edge would take part in a “Talking Pictures” discussion after a “Mandela: Long Walk to Freedom” screening at 9:30 a.m. on Sunday morning.

The festival runs through next Monday, January 13.