"Nobody knows what the times are for independent film, but it’s still alive and well, and any film that treats the audience responsibly has a shot," said Kieran Mulroney, the bespectacled half of the husband-wife team that wrote and directed the movie at the after-party at the Napa Valley Grille.

Mulroney and wife Michele, who have been writing partners for 12 years, are also the writers of Warner Bros’ upcoming "Justice League," though "Paper Man" marks their first stint as directors.

The film tells the story of Richard Dunn (Jeff Daniels), an author who holes up in a seaside cabin to simultaneously battle his writers block and his floundering marriage with his wife (Lisa Kudrow). During his stay, he meets a Long Island teenager, Abby (Emma Stone), and the two bond over their shared loneliness.

Indeed, both have imaginary friends — Richard’s is a superhero named Captain Excellent (Ryan Reynolds), who has lived inside his head since second grade and constantly badgers the writer to evaluate his actions.

But the big stars of "Paper Man" were not in attendance. In lieu of their absence, Daniels (currently starring in "God of Carnage" on Broadway) and Reynolds (whose film "The Proposal" opens this weekend) shot a short clip that aired before the movie. The clip featured the two on the phone, trying to top one another with a comic list of reasons they couldn’t attend the fest.

"Nothing makes me happier than allowing filmmakers to birth their film in their hometown," said the fest’s new director, Rebecca Yeldham, before the screening. She also thanked Richard Raddon, her predecessor, who resigned last November after it came to light that he’d made a donation to a group supporting Proposition 8.

Film Independent’s executive director Dawn Hudson said she was proud to be hosting a festival during a tough economic climates: "Art is not a luxury, even in hard times," she said.

At the after-party, Hudson (pictured below, far left with Yeldham, Kieran Mulroney, Stone and Michele Mulroney) told TheWrap that she chose "Paper Man" as the opening night film late in the game — viewing it as the filmmakers were still color-timing the movie. 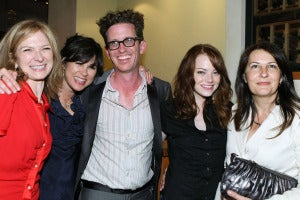 "It was like we were waiting for that right guy to come along, and then we found him and finally got married," she said. "You really feel the Mulroneys’ heart and their personal vision in the film. And that’s what this festival is about — artist-driven films."

This year’s 10-day festival will screen 200 films from 30 countries, with fare ranging from big-picture Hollywood flicks like "Public Enemies" with Johnny Depp and "Transformers: Revenge of the Fallen" to a 14-hour Chinese documentary.

"Nobody supports indie film like the L.A. Film Festival does," Kieran Mulroney said, his eyes darting around the buzzing party. "So for us, being a film without a distributor, this is a really big deal."