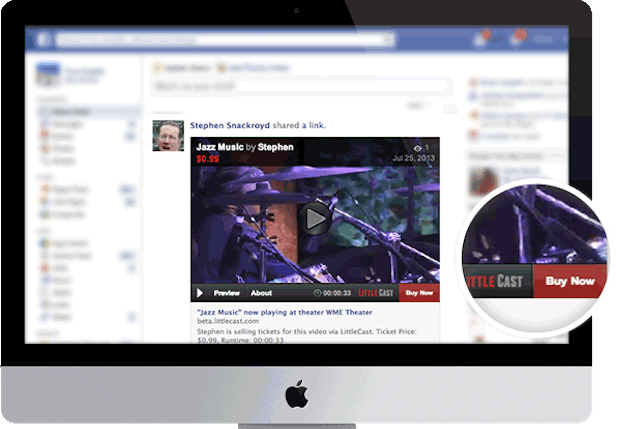 Paradigm has partnered with LittleCast to help Hollywood talent sell videos directly on Facebook and other websites, the companies will announce on Wednesday. LittleCast, which made its public debut in September, lets anyone publish videos straight to their Facebook page, and also offers a player that creators can use to embed the videos on others sites as well.

Users can preview the video, buy the video or download it to their phones using LittleCast’s app. The company has already raised $2 million in capital, and what it needs now is an introduction to top celebrities, stars and brands. It wants actors and directors selling their latest web series or stand-up special using their technology.

That’s where Paradigm comes in.

“We’re a start-up partnering with a company that has Hollywood in its DNA,” LittleCast CEO Amra Tareen told TheWrap.

The talent agency, which represents actresses such as Shailene Woodley and Claire Danes, will introduce LittleCast to its own clients as well as talent at other shops. It will also be a partner in scaling the business.

Several different companies have pitched themselves as a go-to partner for direct-to-fan sales, including VHX, which helps people sell rom their own websites, and Vimeo, which markets itself as a store.

Lawrence Antoine, Paradigm’s EVP of strategy and digital business development, said he was drawn to LittleCast because of its integration with Facebook.

“We have hundreds of companies pitching clients for different services looking for business development help, but this is a special situation,” Antoine told TheWrap. “Bringing additional technology to an established company like Facebook says a lot.”

LittleCast’s integration into Facbeook is what makes it different from companies like VHX, Vimeo and Chill, which also offer filmmakers the opportunity to distribute their work on their own.

That integration comes at a price since Facebook takes a cut, but that applies across the board. Creators who upload videos using LittleCast surrender percentages of revenues to Facebook and Apple, as well as LittleCast.

Posting to Facebook also rewards creators with data on who is watching and buying their videos.

“Facebook is the number three destination site for video,” Tareen said, noting that it finishes behind YouTube and AOL. “If you recall what Vevo did for YouTube, we want to do that for paid video.”