The more we pay attention to and fear demons, a priest warns in “Paranormal Activity: The Ghost Dimension,” the more power we give them. This limp sixth entry in the once-groundbreaking horror series suggests the opposite is true as well: the less frightened we are by a movie that’s supposed to give us the chills, the less reason it has to exist.

(Paramount, incidentally, is trying to pass this one off as the fifth in the series, as though 2014’s “Paranormal Activity: The Marked Ones” doesn’t count, but that movie totally ties into the story, making this new entry an even half-dozen.)

Taking the “Paranormal Activity” movies out of the hands of screenwriter Christopher Landon, who shepherded the franchise (for better or for worse) through the second through fifth entries, first-time director Gregory Plotkin and a quintet of credited writers circle back to familiar territory this time around, taking us back into a generic suburban McMansion where spooky doings are afoot.

As such, it’s a movie whose plot points you can basically tick off a list, from the discovery of a box of mysterious videotapes to the eventual “Night #1” title card as the house fills up with cameras hoping to capture the bizarre goings-on. (Yes, this is still a found-footage horror series, which means we will inevitably encounter moments in which characters run for their lives without ever stopping to put down the dang camera.)

Barely earning its R rating, “Ghost Dimension” relies on the old stand-by of jump scares, with poltergeists suddenly whooshing and whomping loudly and suddenly through the scene. Despite Plotkin’s background as an editor (he also has producer credits on the three previous “PA” movies), these jump scares are so utterly predictable that they might as well be heralded on-screen with a bouncing ball and an appearance by the Oogieloves. 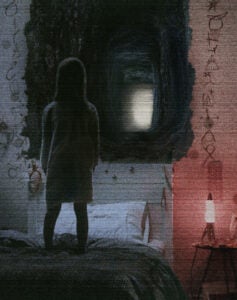 Ryan sees things floating in the middle of his living room while using that camera — he thinks it’s a flaw but later realizes that the device has twice the usual picture tubes and a very complicated system of lenses. As time passes, he realizes that the camera is picking up a ghostly presence in the house, and that’s about the moment when Leila starts talking to invisible friends and doing charming things like burying rosaries in the yard or ripping up bibles in the middle of the night.

(When people talk about faith-based cinema, they usually mentions movies like “God’s Not Dead” or “Woodlawn,” but does any genre take devils and religion as seriously as horror?)

The tapes, meanwhile, drag those evil moppets Katie and Kristi back into the story, suggesting that somehow, from decades earlier, they can see what’s going on in Ryan and Emily’s house. Does any of this weird stuff raise sufficient alarm, or induce the parents to call a clergyperson or an exterminator or the Ghostbusters before it’s too late? Of course not.

Soon Leila is going into weird trances, and creating doorways to alternate dimensions on her bedroom walls with crayon — which, incidentally, her parents don’t even try to erase with a little 409 and some paper towels — and by the time a local priest is making holy water in the spa tub and making salt circles on the hardwood floors, it might be too late to save everyone. And if you’ve ever seen any of the “Paranormal Activity” movies, you can guess where this is all going, down to the final shots.

The movie’s climactic exorcism jamboree provides some relief from the movie’s overwhelming dullness, and the final segments put the movie’s 3-D to use, but overall, “Paranormal Activity: The Ghost Dimension” feels like the last wheeze of a played-out series. When the time on your watch becomes more compelling than the timestamp on the movie’s video footage, it’s time to pack it in.