Justin Beiber is not a new phenomenon, only the newest teen heartthrob in a line of younger and younger teen celebs claiming the limelight.

He’s 16 but looks 12; sounds like a 13-year-old and pulls at the heartstrings of girls ages 2 (remember his visit to the crying toddler?) to 40.

After his recent gig on "Saturday Night Live" with Tina Fey, perhaps even older fans have fallen prey to the teen crooner’s hex, but I doubt these closet admirers will openly admit they listen to his music or are attracted to his comb-over style hair, for fear of their kids’ eye-rolling disapproval.

So, where did Beiber come from and why did he take the t(w)een population by storm?

Justin Beiber was born in Stratford, Ontario, Canada, and got his singing career break over YouTube — yup, that video website your kids are obsessed with.

The Canadian singer was raised by a single mom and taught himself how to play the piano, guitar, drums and trumpet. Wish I knew how long it took him to master all of these instruments since he is only 16! (Guess he didn’t have time to play videogames, huh?,) 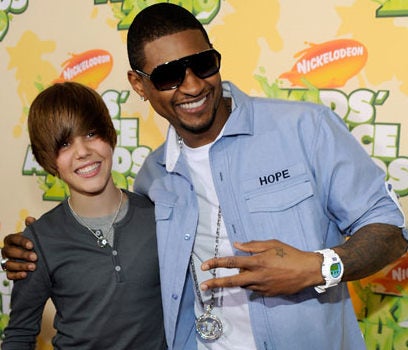 He and his mom posted videos of his contest performances where he would sing Usher and Ne-Yo songs — among other artists — for his out-of-town family to watch. One day Scooter Braun, a 28-year-old talent manager, had a look at the young singer’s videos and convinced Bieber and his mom to fly to Atlanta — now his home — to audition.

On this fateful trip, writes Amy Kaufman (ex-TheWrap columnist, now L.A. Times writer), Justin met Usher in a parking lot and secured his backing. (What are the odds of that happening , huh?)

Faster than you can pocket a million bucks, Beiber signed with Island Records and was on his way to superstardom.

You’ve seen the fresh-faced sensation everywhere lately, including this month’s cover of People magazine (terrible photo, btw!). His image has been carefully manufactured to appear "streetwise" — conspicuous tennis shoes, ball caps and leather jackets — and is probably a deliberate attempt to go in the opposite direction of the uber-famous teen singing siblings, the Jonas Brothers.

They made the cover of Rolling Stone!

Beiber has all but dethroned teen performers Nick, Joe and Kevin Jonas, who ruled the young adult scene for a good couple of years. Personally, I enjoyed the trio’s clean image and bubblegum pop, and thought they’d remain a constant in the music scene longer than they have.

But, what do I know about the music business?

I only know what’s happening by how quickly posters go up and down in my kid’s room or by the amount of my iTunes bill.

While Beiber’s young following is relentlessly devoted, there was enough room for the pimpleless kid to come in and take over the heartbroken and disillusioned ex-Jonas fans. After Joe Jonas’ serial break-ups, the Miley and Nick debacle and then the clincher, Kevin Jonas tying the knot, it was probably more than tender teen hearts could bear.

Another good thing Beiber has going for him is that teens themselves voted him No. 5 as a "Best Good Example" on an online poll by AOL’s JSYT magazine in October 2009.

Checkmark for Justin on this front.

On the other hand, the small fry has been doing the obligatory talk-show rounds and landed a gig on "Saturday Night Live," not parents’ favorite show for their kids. Tina Fey, who is hilarious, and Justin did a sketch where she’s a teacher and he’s in her class. She has cougar-like dreams of him, which were funny, but not appropriate for tweens who may have been allowed to stay up late watching since their teen idol was on the show.

I still don’t get why the networks want to bank on putting kid celebs on their late-night shows. What’s the target audience, and what could having a teen singer on at midnight possibly do for their ratings but provide a short-lived spike while exposing young viewers to some inappropriate content?

At any rate, Justin Beiber did an OK job on "SNL," but I wouldn’t hold my breath for his upcoming 3D concert movie — at least not yet.

Beiber is a cutie fo’ sho’ — I’m bad at mimicking his rapper-friends’ lingo as he likes to do — and his non-Disney-incubated image certainly has a wider audience appeal.

I also think he’s one to safely follow along with your kids.

But let me caution you: I’m noticing serious obsessions with this kid on Twitter and other fan sites (lots of crying, begging for him to tweet back, etc.). It’s a growing phenomenon thanks to the immediacy of social media.

Beiber Fever is spreading faster than the H1N1 virus and there’s no vaccine for this ailment of the adolescent heart!

While being a fan is fun, I’d like to put a word in for parents: Keep an eye on those busy, busy online tweens and teens pursuing their infatuations with celebrities.

Poster-lined bedroom walls are quite different from trying to get in touch with celebrities via Twitter, Facebook, etc. Cyberspace is open 24/7, which means before, during and after school. Just sayin’.

Going to a concert or other venue to get their fix may help satisfy these young girls’ yearnings to be close to their idols ("I just want Justin Beiber to know me" or "I just want to give him a hug" — sound familiar?) but it’s probably healthier if teen minds are occupied with more realistic goals like getting good grades in exchange for a concert ticket.

So, let me ask you: If you’re the parent of an obsessed t(w)een, what do you do to keep celebrity fantasies in check?

Suzette Valle was recognized by Time Warner Cable as one of San Diego's Best Moms. She is the author of "101 Movies to See Before You Grow Up" (Walter FosterJr. Fall 2015), a reference book for kids. She has appeared on the "Dr. Phil" show discussing the effects of reality shows on families. Her posts have been featured on Fox,YahooMovies.com, and Movies.MSN.com. A mother of two, she lives in San Diego with her husband. She blogs about parenting and Hollywood's influence on children's daily lives and family values at www.MamarazziKnowsBest.com. Follow her on Twitter: @SuzetteValle.
The essential source
for entertainment insiders