As the entertainment world scrambled to modify its plans following the tragic terror attacks in Paris, the industry responded Sunday with tributes to the victims, broadcast shifts and the cancellation of movie premieres and music concerts.

Lionsgate announced it planned to scale down Monday’s Los Angeles premiere of “The Hunger Games: Mockingjay – Part 2” at LA Live.

“Out of respect for the very recent events in Paris, we have decided to modify our red carpet and we will not conduct interviews at Monday’s ‘Mockingjay 2’ premiere,” the studio said in a statement Sunday. “We will proceed with the rest of the event as planned in honor of the incredible fans who have always supported our films with such passion.”

The finale in the “Hunger Games” series, which stars Jennifer Lawrence, Josh Hutcherson, Liam Hemsworth, and Elizabeth Banks was partially shot in Paris. There was no word from the studio about Wednesday’s New York premiere of the film, which opens nationwide Friday.

Lionsgate wasn’t the only studio shifting its plans.

Sunday’s Paris premiere of the Steven Spielberg-directed Tom Hanks spy saga “Bridge of Spies” was canceled by Twentieth Century Fox. And Vivendi-owned Mars Films pulled the plug on the Monday night Paris premiere of Natalie Portman‘s Western “Jane Got a Gun,” as well as the star’s planned press sessions and TV appearances in the wake of the attacks.

On the TV side, CBS pulled terrorism-related episodes of “Supergirl” and “NCIS: Los Angeles” that had been scheduled to air in primetime on Monday night. 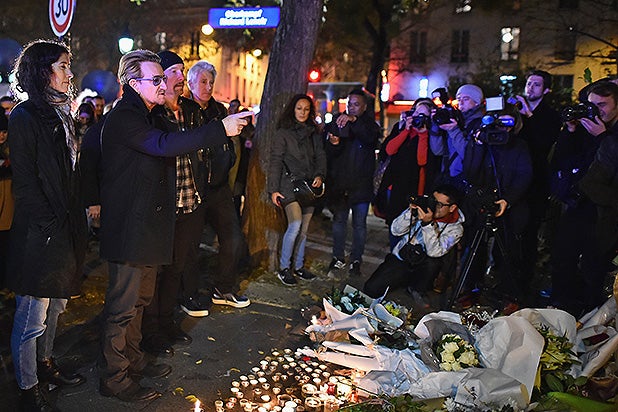 U2 Visits a Memorial Outside the Bataclan Theatre (Getty Images)

The originally scheduled 10 p.m. episode of “NCIS: Los Angeles” focused on ISIS recruitment and will be swapped out for an episode titled “The Long Goodbye,” which sees the team searching for a missing colleague. The network replaced the scheduled 8 p.m. episode of “Supergirl,” which dealt with bombings throughout National City, with a Thanksgiving-themed episode.

The music industry took the tragedy particularly hard and reacted swiftly, in part because one of the attacks occurred at the Bataclan concert hall, where California band Eagles of Death Metal was playing. The group’s merchandise manager was among those who lost their lives.

The Foo Fighters canceled the remaining dates of their Sonic Highways World tour, including a concert in Paris, and rock band U2 scrapped performances scheduled for Saturday and Sunday night in the City of Lights. The Saturday night show was to have aired as an HBO TV special. Instead the group visited a memorial to the victims outside the Bataclan.

“If you think about it, the majority of victims last night are music fans. This is the first direct hit on music that we’ve had in this so-called War on Terror,” U2 frontman Bono said Saturday in a radio interview, as reported by Rolling Stone.

“It’s very upsetting. These are our people. This could be me at a show,” he continued. “It’s a very recognizable situation for you and for me and the coldblooded aspect of this slaughter is deeply disturbing and that’s what I can’t get out of my head.” 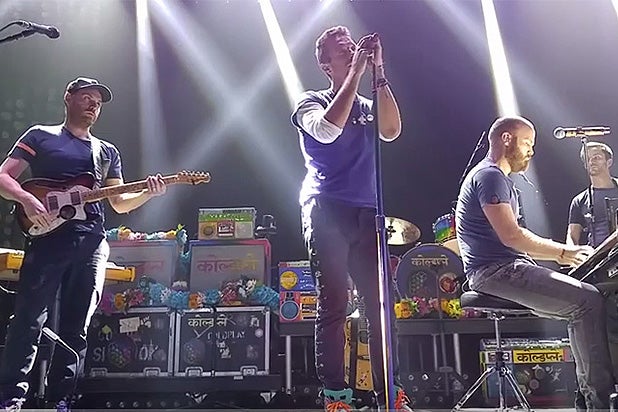 In Los Angeles, rock band Coldplay was working to set up a new date and location for a show, after the group’s Friday night performance at the Belasco Theater was cut short in the wake of the attacks. Plans to stream the show live on Jay Z’s Tidal service were scrapped, though the group performed an abbreviated set for the fans who had already arrived.

Across town, Cheryl Boone Isaacs, president of the Academy of Motion Picture Arts and Sciences, issued a ringing call for solidarity with France during the Governors Awards on Saturday.

“We may be in Hollywood tonight, but the Academy celebrates filmmaking wherever it’s done…” she said in a salute to France’s role in the history of filmmaking. “Waves of influence have been flowing back and forth across the Atlantic ever since the Lumiere brothers made the first movies.”

NBC’s sketch comedy series “Saturday Night Live” replaced its traditional cold opening with a message to the citizens of Paris.

“Paris is the City of Light, and here in New York City, we know that light will never go out,” cast member Cecily Strong said while standing on stage in Rockefeller Center’s Studio 8H, facing the camera. “Our love and support is with everyone there tonight. We stand with you.” Strong then repeated the same emotional message in French.

France responded by bombing a series of ISIS sites in Raqqa, Syria, on Sunday including a jihadi training camp and a munitions site where intelligence officials said the Paris attacks were planned, the Associated Press reported.

Additionally, police announced seven arrests. However more members of the sleeper cell that carried out the attacks were still believed to be at large.