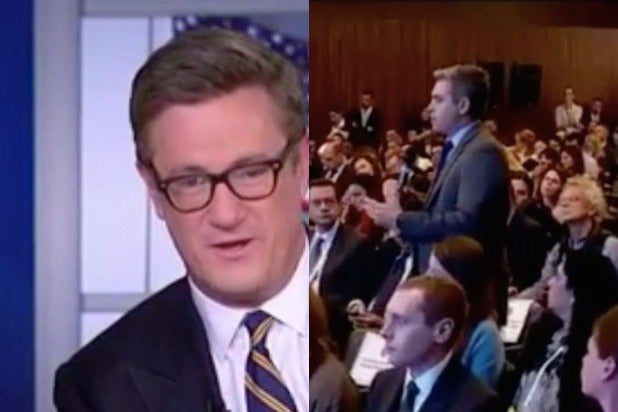 The attacks on Paris brought out predictable calls for by war against ISIS by Republicans, but a surprising number of media figures also jumped into the fray.

Much like in the buildup to the Iraq War, TV news journalists have been reacting first and asking  questions second following the attacks.

MSNBC’s Joe Scarborough, who was in favor of the Iraq War before backtracking years later, sounded a familiar refrain on Monday.

“What has gone on before cannot go forward,” he said on “Morning Joe.” “We’re going to have to look at this terror threat in a different way – much like America had to after 9/11,”

Scarborough gave viewers a history lesson, pointing out that from 1945-1991, NATO countries would go to war with “belligerent” force if one of its own were attacked.

Also Read: Rachel Maddow Chews Out Media for Booking Iraq War 'Yahoos' Who Got It Wrong the First Time (Video)

“Do we [the U.S.] need to do that now?” he asked retired Admiral James Stavridis about going to war against ISIS. “We do,” Stavridis answered.

“Why can’t we take out these bastards?” a frustrated Acosta asked the president. He set up the question by speaking for Americans who see the U.S. as having the “greatest military in the world” but not using it to fight ISIS.

Cenk Uygur, a former MSNBC anchor and current host of the web sensation “The Young Turks,” called out the media for beating a war drum.

“The establishment media just came up with a genius new idea — more bombing and war!” he told TheWrap. “I’ve got bad news for them, that’s exactly what we were doing right before the Paris attacks.”

Uygur pointed out that the U.S. has dropped an estimated 5,000 bombs on ISIS targets already.

“You might be able to argue that you like that strategy anyway, but you can’t argue that it’s been effective in stopping them,” he said.

“It does a disservice to the public to engage in such shallow warmongering,” Feldstein, who teaches journalism at University of Maryland, told TheWrap.

“It would be unacceptably biased if the press pushed for a peace agenda, but the minute an opportunity arises they jump in with both feet pushing for a militaristic approach,” he said.