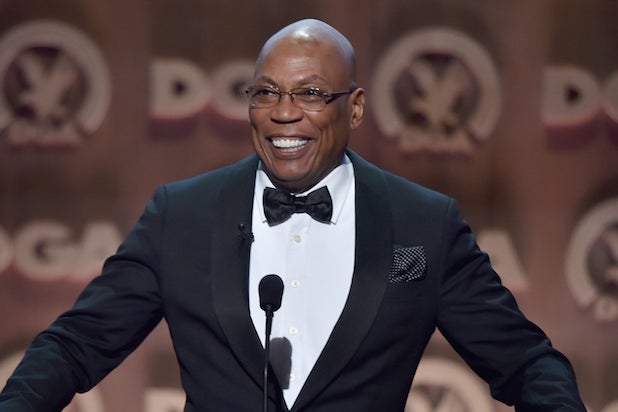 Director Paris Barclay has been re-elected to a second term as President of the Directors Guild of America, the DGA announced on Saturday.

The election was made by acclamation at the guild’s National Biennial Convention at DGA headquarters in Los Angeles. Other officers elected included Jon Favreau, Betty Thomas and Thomas Schlamme.

Barclay was first elected to a two-year term as DGA president in 2013, ending a decade in which the guild was led by presidents, Michael Apted and Taylor Hackford, who were best known for their film work. Barclay’s career has focused on TV, with more than 150 episodes of such shows as “In Treatment,” “Glee,” “NYPD Blue,” “Weeds” and “Sons of Anarchy.” He won the DGA Award for “NYPD Blue” and also won two Emmys for that show.

“We continue to advance a vision first conceived by masters of our craft nearly 80 years ago, and while our mission remains the same, we’re part of an industry and world changing at the speed of light,” said Barclay in a statement. “I’m proud to serve alongside the Guild’s newly elected leadership to protect the creative and economic rights of our members. It’s the most challenging, most complex, and ultimately the most rewarding thing I have ever been asked to do.”

His committee work at the guild includes co-chairing the African American Steering Committee from 2000-2002 and co-chairing the Diversity Task Force from 2004-2013. He has also served on the Single-Camera Creative Rights Negotiating Committee, the Single Camera Directors Prep Program (which he created) and the DGA Political Action Committee.