First-time women and minority directors don’t get the same opportunities as their white male counterparts on scripted TV series, according to a report issued Thursday by the Directors Guild of America.

In the five-year period studied (the 2009-2010 through 2013-2014 TV seasons) by the gender and ethnic diversity survey, 479 directors received their first assignment in episodic television. The study revealed that 82 percent of all first-time episodic directors during the five-year span examined were male and only 18 percent were female; 87 percent were Caucasian and only 13 percent were minority directors.

“There’s a big opportunity here for those in charge of hiring to make a difference,” said DGA President Paris Barclay, “but they’re not. Without change at the entry level -– where women and minority directors get their first directing assignment -– it’ll be status quo from here to eternity.

“Every director needs a first shot to break into the business, and what this report reveals is that studios, networks and executive producers need to challenge their own hiring practices and offer talented women and minority directors the same opportunities they are giving white males,” he said. 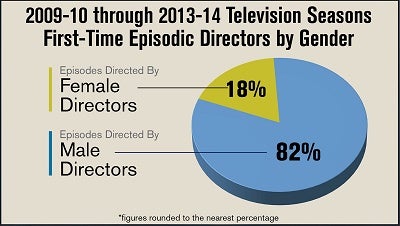 The study broke down the first-time gigs by the directors’ background and experience, too.

Writers made up 28 percent of the first-time episodic director pool; actors made up 18 percent; assistant directors/unit production managers comprised 10 percent; cinematographers and camera operators were eight percent; editors totaled five percent; other crew made up five percent and non-writing producers were one percent.

The remainder of the group was made up of people who had previously directed in other genres including independent film, new media, commercials, music videos, student films and documentaries.

“Look, the data makes it clear. Even when hiring first-timers, the studios and executive producers are making choices that show they don’t actively support diversity hiring,” said Betty Thomas, DGA first vice-president and co-chair of the DGA’s Diversity Task Force.

“First-time TV directors are new to and come from all areas of the industry including film school — so why is a woman or minority any less qualified than anybody else? It seems clearer than ever that we need to see different points of view. Most of the industry claims to want a more diversified directing workforce – here’s their chance. It could all start here.”

This is the first in a series of DGA reports analyzing multiple aspects of the hiring practices for first-time episodic directors.