Netflix released the first trailer for Paris Hilton’s upcoming “cooking” show (scare quotes theirs) on Tuesday, giving the heiress the chance to demonstrate her kitchen prowess ahead of the show’s August premiere.

Set to premiere on Aug. 4, the six-episode “Cooking With Paris” follows Paris and her celebrity guests as they go “from the grocery store to the finished table spread.” The show is inspired by Hilton’s viral lasagna video from last year, which has since accumulated more than five million views.

Hilton, importantly, is not a trained chef, and as such is apparently unfamiliar with concepts like zesting lemons and the word “tongs.” But fear not, “With the help of her celebrity friends, she navigates new ingredients, new recipes and exotic kitchen appliances,” Netflix says. 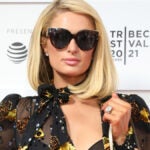 Hiltons acts as executive producer on the series alongside Aaron Saidman, Eli Holzman and Rebecca Hertz. The show is produced by The Intellectual Property Corporation, which also produces the celebrity cooking show “Selena + Chef” for HBO Max and previously collaborated with Hilton on the 2020 YouTube Originals documentary “This Is Paris.”