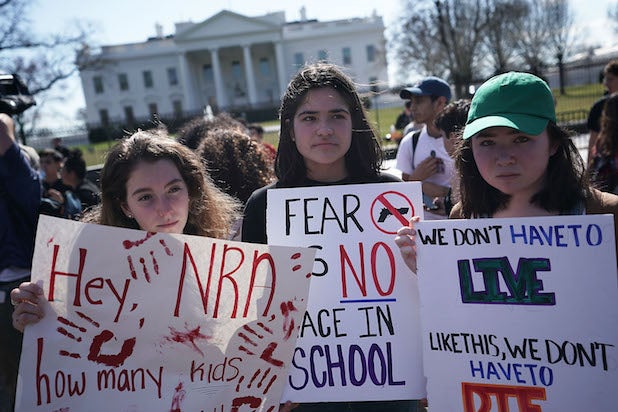 In a surprising turn, the National Park Service has denied an application from the survivors of the mass shooting in Parkland, Florida to hold a gun control rally at the National Mall in Washington, D.C. on March 24.

The application for the “March For Our Lives,” a rally organizers expect to draw 500,000 attendees, was denied because the event conflicts with a “student project” described in a film permit application as a “talent show,” the Washington Post reports. A Park Service spokesperson, Mike Litterst, told the Post that “March For Our Lives” organizers are now looking to move the rally to another location.

In the undated application, a redacted version of which was posted online by the Post, the event is described as a “student project (non commercial),” which includes “filming for a talent show.” The application says the event “takes a day to finish,” and that “games will be the main activity for filming.”

The March For Our Lives rally application said it would need room for 14 Jumbotrons, 2,000 chairs and 2,000 portable restrooms to accommodate “student speakers, musical performers, guest speakers and video tributes.” By contrast, the student group’s application said it needed room for only “2 tables, two bikes, and jumping ropes,” as well as an unspecified number of “small cones… to range the filming area.”

It’s unclear when the student group submitted its film permit application, as whoever completed it failed to to fill-in the date space next to their signature. The March For Our Lives application was dated 2/20/2018, two days after the event was announced.

The National Park Service did not immediately respond to TheWrap’s request for comment.

According to Litterst, organizers of the march, funded in part by Oprah Winfrey, George Clooney and other celebrities, were planning their rally on Pennsylvania Avenue between Third and 12th streets NW, a jurisdiction of the District.

D.C. police told the Post a permit for the march was filed with the agency but declined to elaborate further.

Also Read: 'Morning Joe': Father of Parkland Shooting Victim Will Hug Marco Rubio If He Does 'the Right Thing' (Video)

March For Our Lives organizers did not immediately respond to TheWrap’s request for comment.