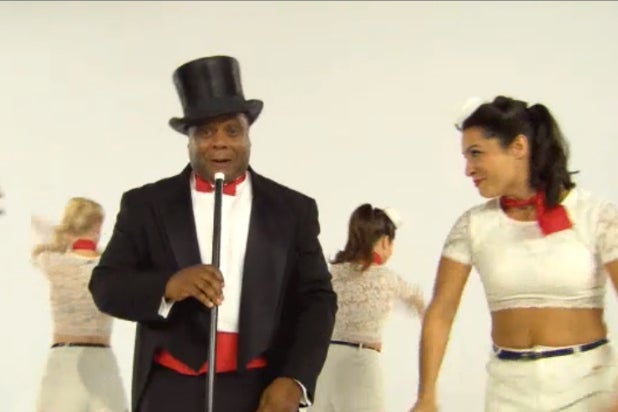 Amy Poehler has endless favorite moments from her 100 episodes of “Parks and Recreation,” but her top one may be the time that her and the cast had to tread lightly across a hockey rink to her character’s campaign podium. At least, that’s the one she cited when put on the spot for NBC’s behind-the-scenes celebration of its critical-darling comedy.

In the slowly progressing TV scene, all members of the Knope (Poehler) campaign fall, slowly, on the ice — except for Chris Pratt — who eschewed an ironically named pratfall in favor of a real one, injuring himself. “Get on Your Feet” by Gloria Estefan was never a more inappropriate pump-up song than it was in the “Comeback Kid” episode.

But Poehler is not the only one who gets ample face time in the 20-minute long special — which kicks off with an obvious musical number by Captain Obvious, Perd Hapley (Jay Jackson). All the mainstays are in the NBC retrospective, which highlights favorite moments, inside jokes and from-the-set stories.

Most of the team’s top scenes were based around their own characters. Aziz Ansari (who plays Tom Haverford) and Retta (as Donna) really enjoyed their “Treat Yo Self” day. Rob Lowe’s top moment was a close-up as his character tried mind-over-matter approach to treating the flu. (“Stop pooping.”)

Pratt’s favorite moment was when his character, Andy Dwyer, saw the Grand Canyon for the first time with April Ludgate (Aubrey Plaza). It was the first time Pratt himself saw the national park — the reaction was genuine — except the whole getting it mixed-up with Mt. Rushmore part.

The behind-the-scenes video was actually quite Pratt heavy, with Adam Scott praising the MouseRat frontman for one of the greatest improvised lines in comedy history.

The moment came in an episode where boss-lady Knope had the flu. As she’s being escorted out of her office to take a sick day, Dwyer, seated at a computer says, “Lesley, I typed your symptoms into the thing up here and it says you could have ‘Network Connectivity Problems.'”

Dwyer never was the brains of the Pawnee operation.

On-screen wife Plaza is her typical oddball self in the look-back. According to captions provided by NBC, Plaza insisted on being interviewed in a tree for the piece and refused to answer actual “Parks & Rec” questions. She elects to do bird calls instead.