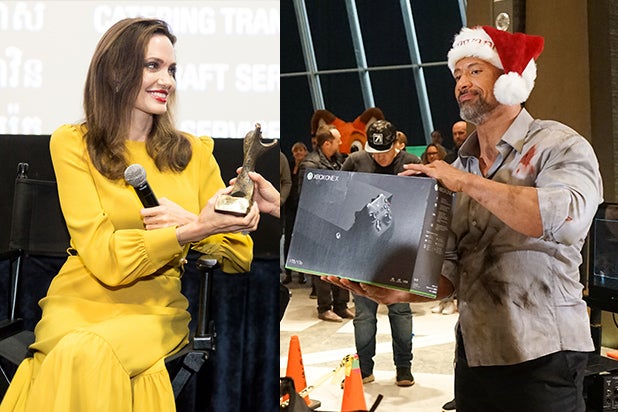 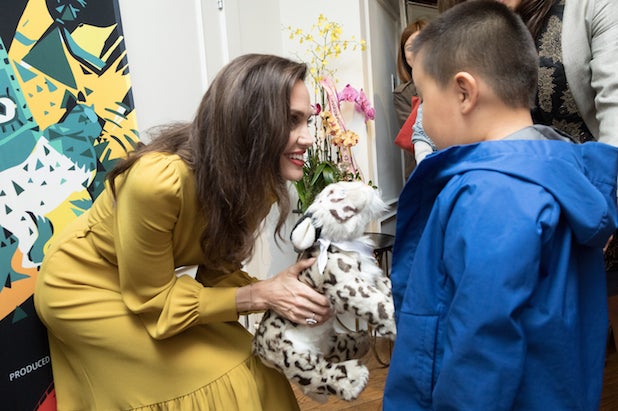 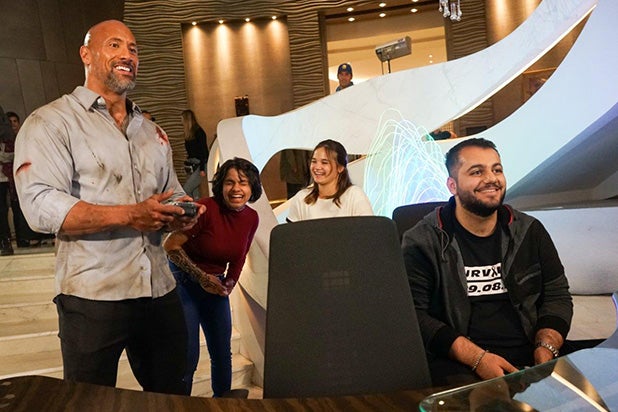 Seven Bucks Digital
Dwayne "The Rock" Johnson Sixteeen years after he introduced the original XBox as Bill Gates' tag-team partner, The Rock has come back. Finally. To help launch the sought-after Xbox One X, he put on a Santa cap and delivered pre-release consoles to three Make-A-Wish children a week before it comes out to the public. 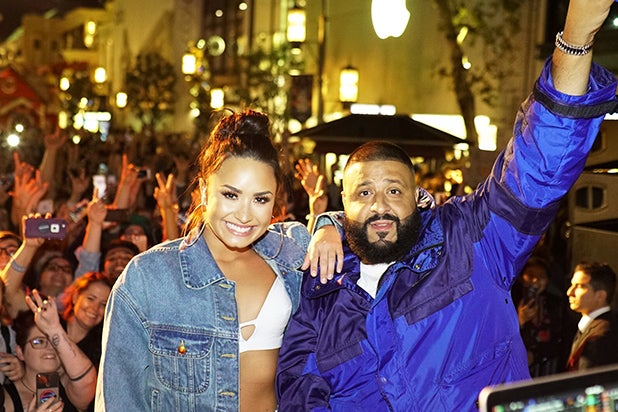 Photos courtesy of Philymack
Demi Lovato and DJ Khaled After announcing that they will tour together in 2018, the two invaded the Grove on Thursday night in a Bentley and behind a 50-person marching band. Lovato performed "Sorry Not Sorry" for the crowd of 1,500. 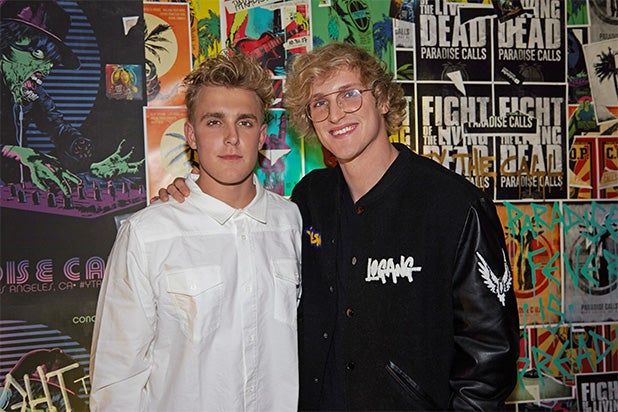 Courtesy of YouTube Red
Jake and Logan Paul Just a few weeks ago, host Jon Cozart dubbed Jake Paul as "YouTube's Trump" at the Streamy Awards. The bit killed in a crowd of the top online video creators in the business. No hard feelings here. The Paul brothers turned up for the premiere party for YouTube Red's "Fight of the Living Dead: Paradise Calls" at Google's pop-up shop on Melrose on Monday night. 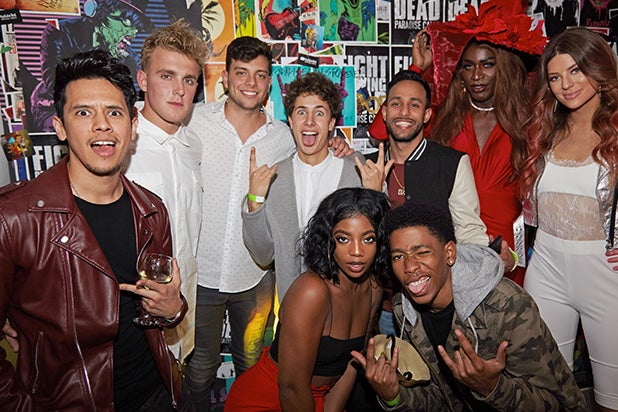 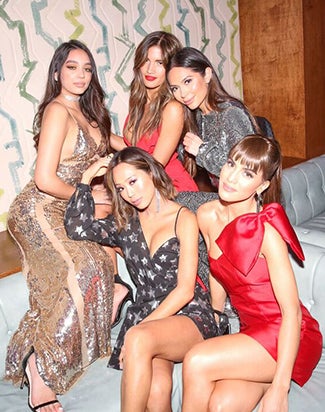 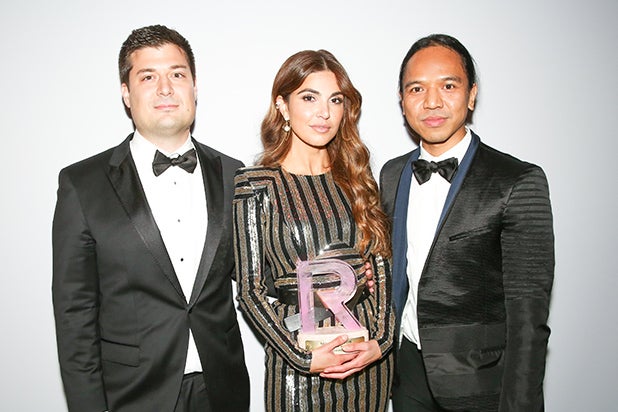 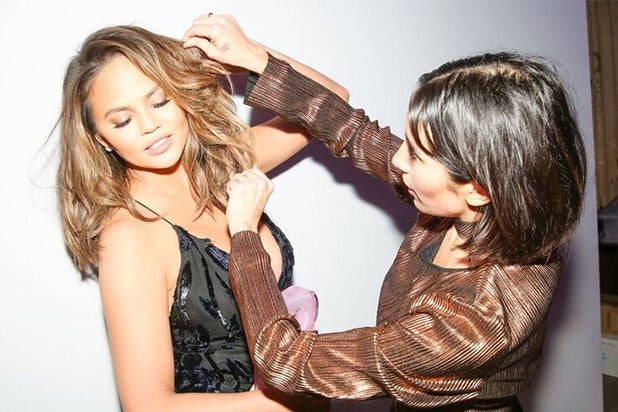 BFA
Chrissy Teigen and Jen Atkins At Revolve, the celeb hairstylist touches up one of social media's savviest. 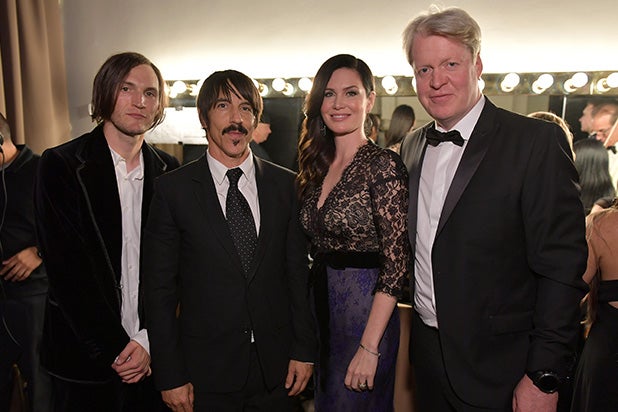 Getty Images for Whole Child International
Anthony Kiedis in a Tux Remember when the Red Hot Chili Peppers used to play naked except for tube socks? No more. The only thing stripped down was the acoustic set Kiedis played at Whole Child International's Inaugural Gala at the Beverly Wilshire. It's a charity run by Princess Diana's brother, the Earl Spencer (far right). 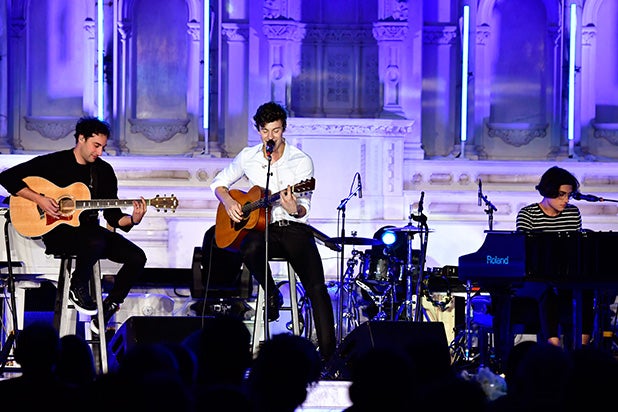 Getty Images
Shawn Mendes at the Spotify Secret Genius Awards The streaming service used the day after Halloween to honor the behind-the-scenes talent who write and produce hit music. 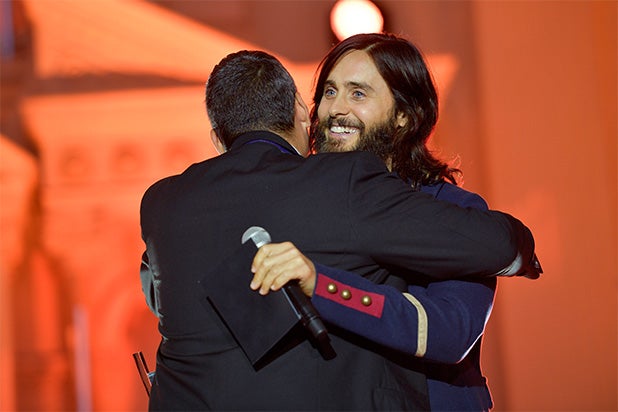 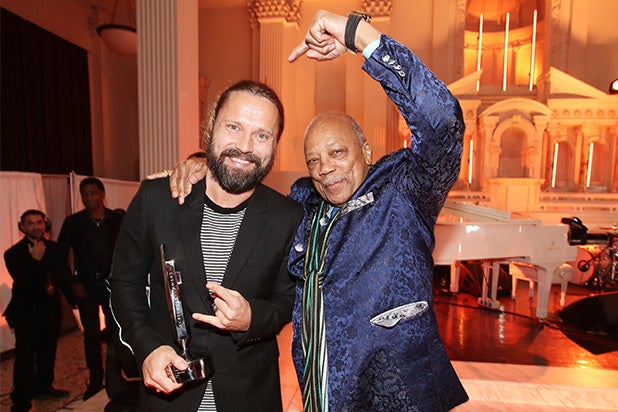 Getty Images
Max Martin and Quincy Jones If a genie appeared at the Spotify event and offered you the royalties of any person in the room for life, it would be a tough call between these two. 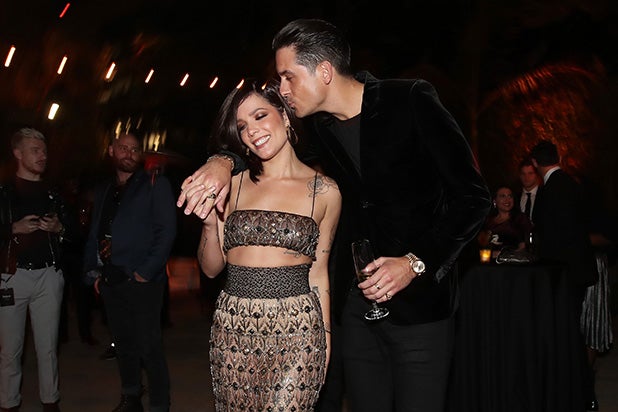 Getty Images
Halsey and G-Eazy Each of these singers had a massively streamed hit with electronic producers in the past year. Halsey went first with "Closer" with The Chainsmokers. G-Eazy and Dillon Francis' "Say Less" was a festival banger all summer. 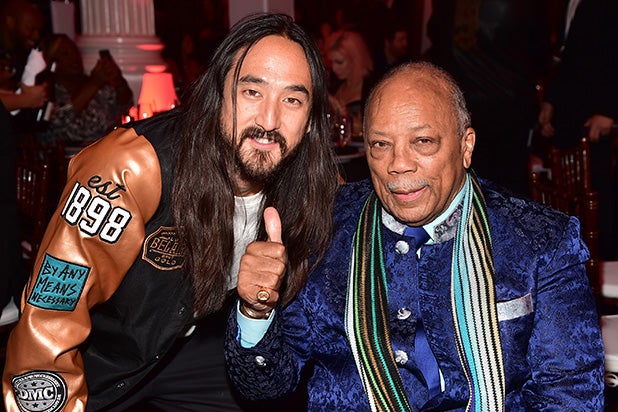 Getty Images
Steve Aoki and Quincy Jones This is a meeting of two producers who used their ear for music to build global multi-faceted businesses. 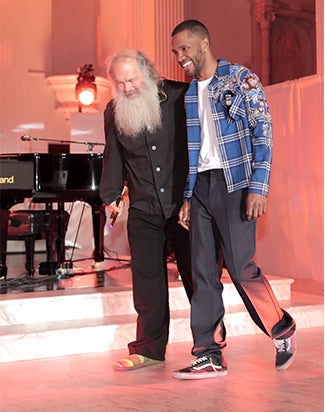 Getty Images
Rick Rubin and Frank Ocean Ocean presented the "Legendary Secret Genius" to Rubin to end the night. These guys kept it short. Ocean reportedly gave a one-sentence introduction followed by Rubin making a gesture of gratitude and walking off without an acceptance speech. 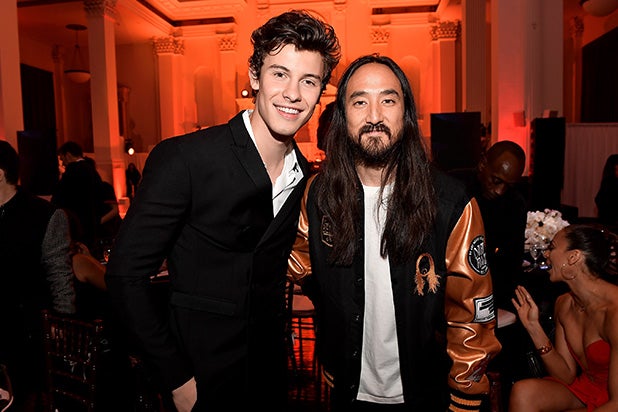 Getty Images
Shawn Mendes and Steve Aoki When's the collab coming? There is a place atop New Music Friday just waiting whenever these two can get together. 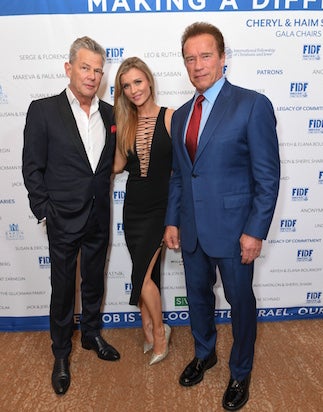 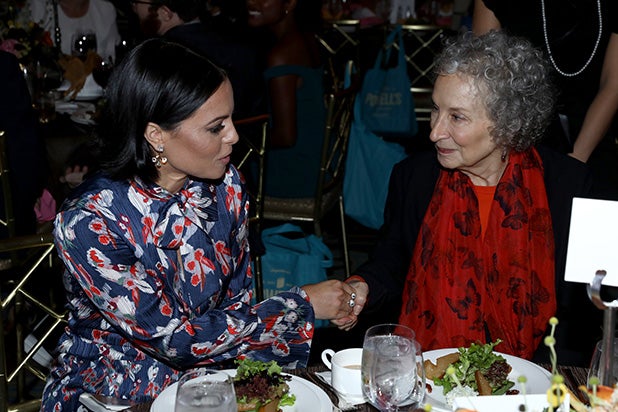 Matt Sayles/AP
"The Handmaid's Tale" author Margaret Atwood (right) Six weeks after Atwood joined the team behind the Hulu smash on stage at the Emmys, the awards are still coming in. Atwood (seated with Sophia Amoruso) earned the Lifetime Achievement Award at the Pen Center's evening celebrating the best and brightest writers and activists. 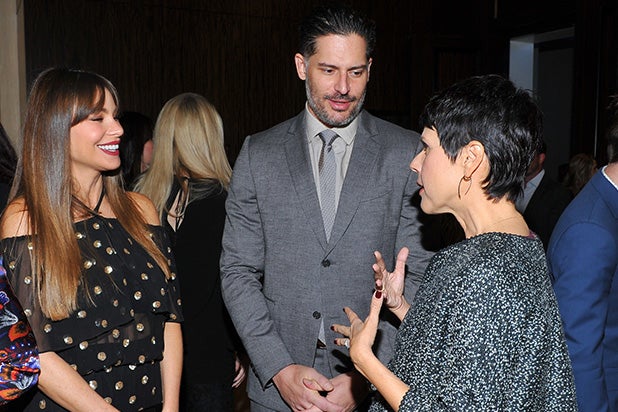 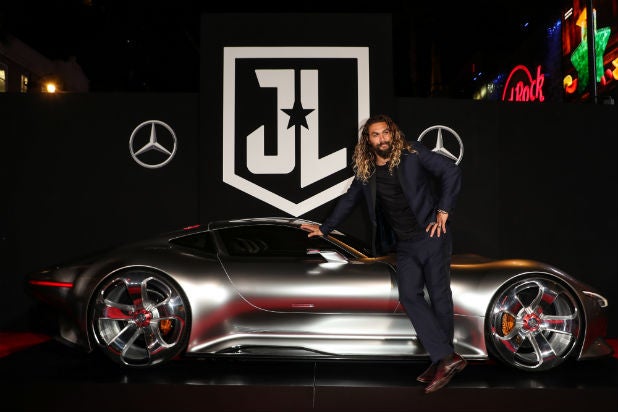 Handout
Jason MomoaAquaman cozied up to one of the best machines available on dry land at this week's Hollywood premiere of "Justice League." The actor posed with an AMG Vision Gran Turismo, driven by Ben Affleck's Bruce Wayne in the Warner Bros film.  Gearheads -- the film also features a Mercedes E-Class Cabriolet and a G-Class off-roader. 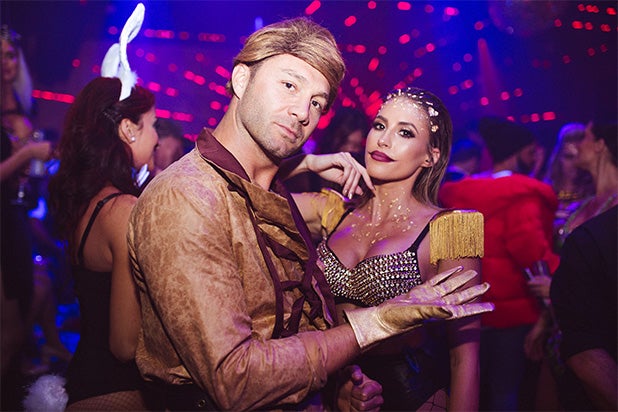 Getty Images
Jason Strauss With Lavo Singapore opening soon and the unveiling of the "Magic Hour" rooftop bar at the Moxy in NYC -- where Heidi Klum had her Halloween bash -- the TAO Group co-founder picked L.A. for Halloween, where Wiz Khalifa performed at Avenue. 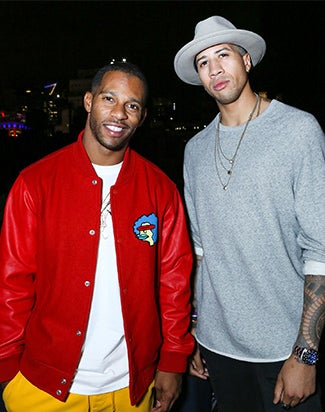 BFA
Victor Cruz and Olympic fencer Miles Chamley-Watson The two athletes were among the first to lay eyes on the killer views of NYC from "Magic Hour." They hit up the opening party last week. 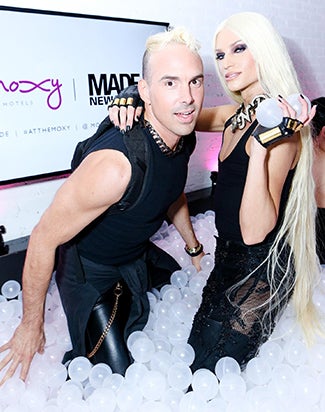 BFA
David and Phillipe Blond That's a ball pit, not a foam party. The fashion designers behind looks for Rihanna, Lady Gaga and Beyonce joined Malin Akerman and Krysten Ritter at the property that's aiming to bring a touch of cool to the very un-cool Times Square zone. 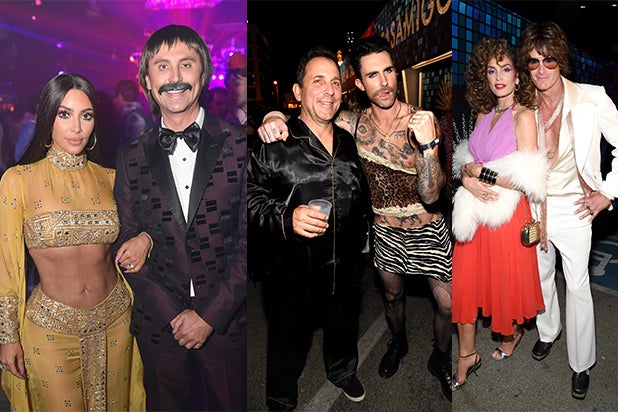