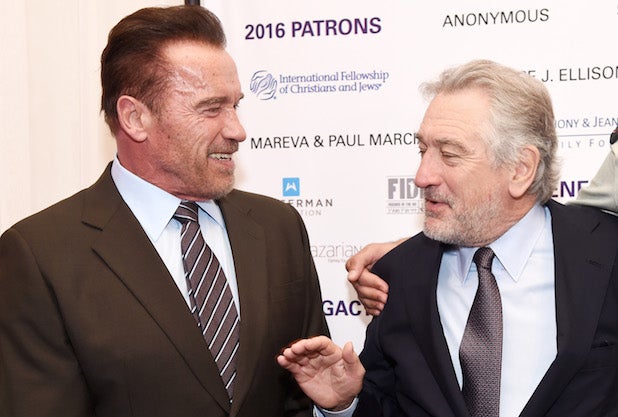 Michael Kovac/Getty Images
Amid reports that Robert De Niro refused to take a photo with Arnold Schwarzenegger at the Friends of the Israel Defense Forces Gala at the Beverly Hilton on Nov. 3, top industry photographer Michael Kovac captured this moment before words were exchanged. "If you're supporting Trump, I want nothing do with you," De Niro reportedly said to the ex-governator, per Malina Saval at Variety. 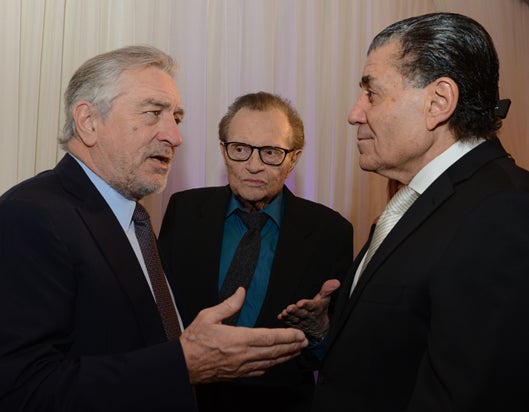 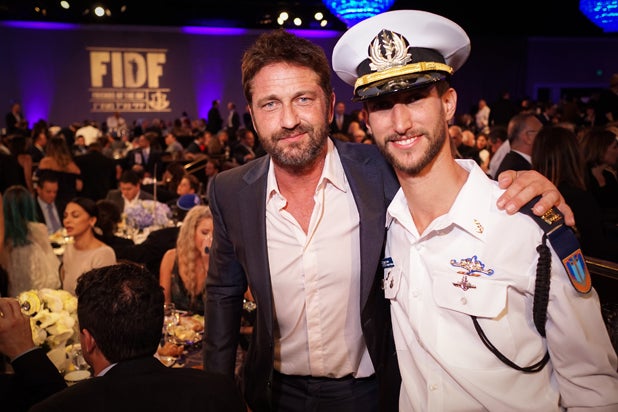 Michael Kovac/Getty Images
Gerard Butler and a soldier at the FIDF benefit. Despite the name and attendees at the event, the FIDF is a non-political, non-military organization that focuses on educational and cultural support programs for "soldiers who protect Israel and Jews worldwide." 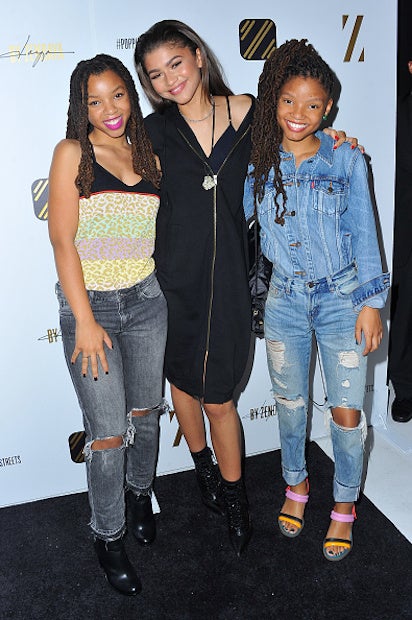 Getty Images
Superfriends: Musicians Halle and Chloe flank Zendaya as she arrived in LA to open her pop-up shop on Fairfax on Saturday night, November 5. Zendaya started the day in NYC, then opened a shop in Chicago, and finished in LA to promote her new clothing line, Daya by Zendaya. The line of fans stretched north up Fairfax for several blocks. 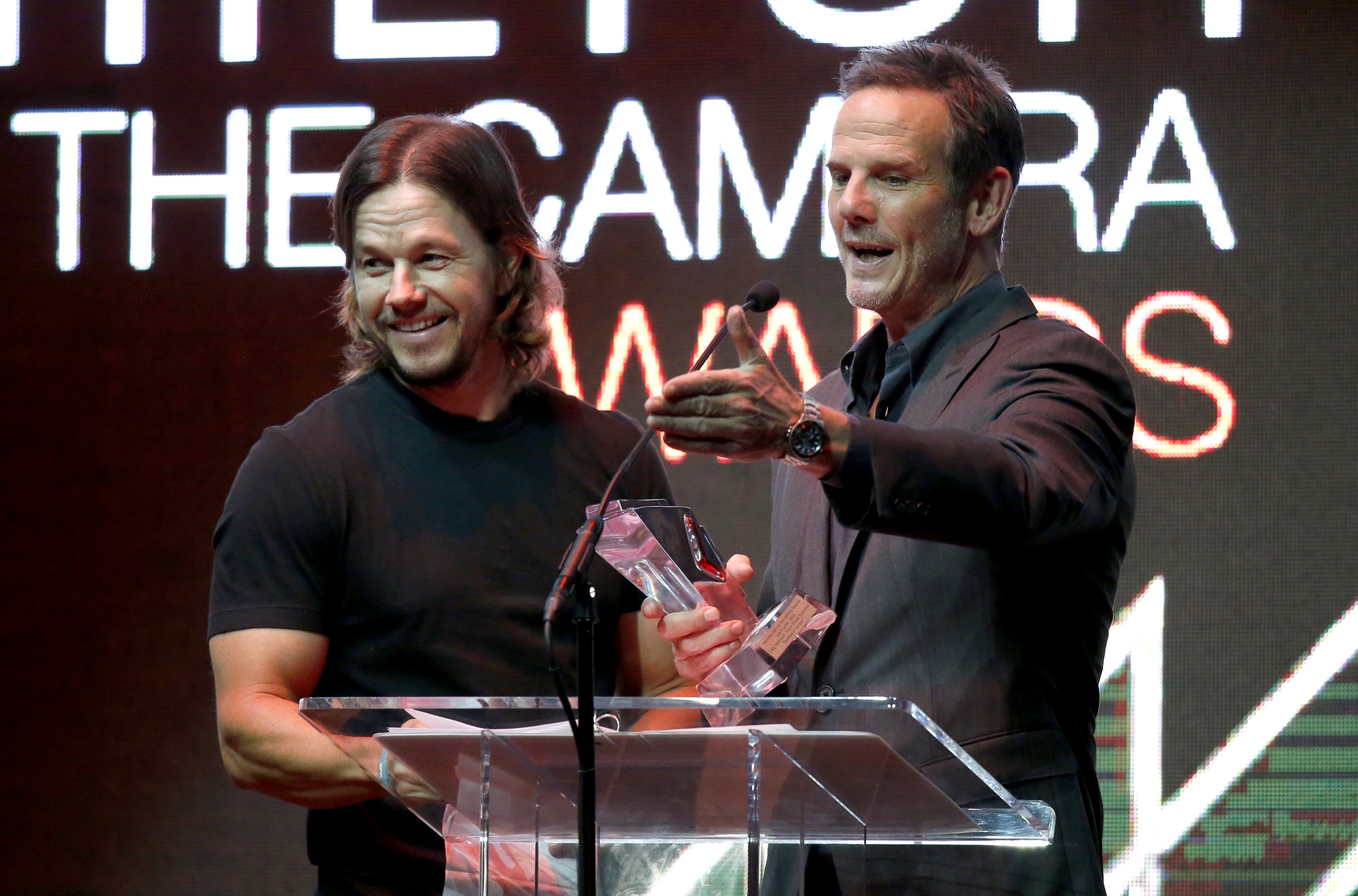 Randy Shropshire/Getty Images for LA Confidential
Mark Wahlberg and Peter Berg, who will debut the Boston Marathon bombing movie "Patriots Day" at AFI next week, took the stage for an honorary award at the Hamilton Behind the Camera Awards at the Exchange LA on Sunday, November 6. Glossy mag L.A. Confidential puts on the show. 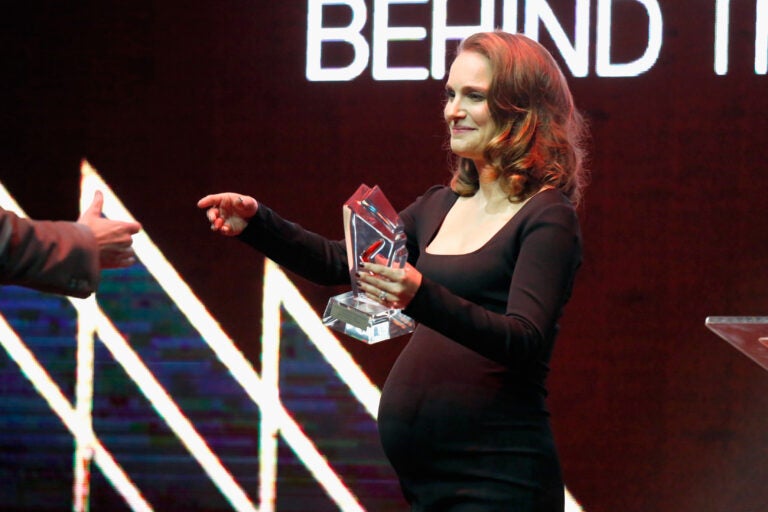 Randy Shropshire/Getty Images for LA Confidential
Natalie Portman went to two awards shows in the same night, picking up at the Hamilton event and the Hollywood Film Awards. 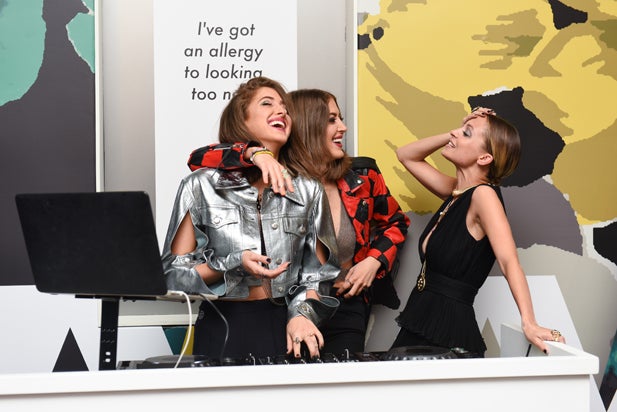 Owen Kolasinski/BFA.com
Katherine Power and Hillary Kerr celebrated the 10th anniversary of their "Who What Wear" digital-style hub with the opening of a 10-day exhibit on Melrose. At the opening night, Sama and Haya Khadra hung in the DJ booth with Nicole Richie. 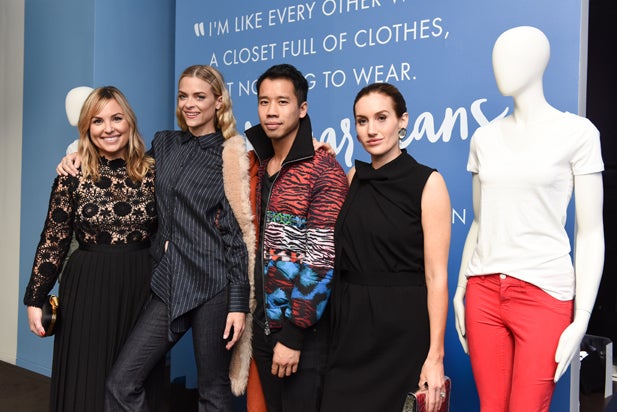 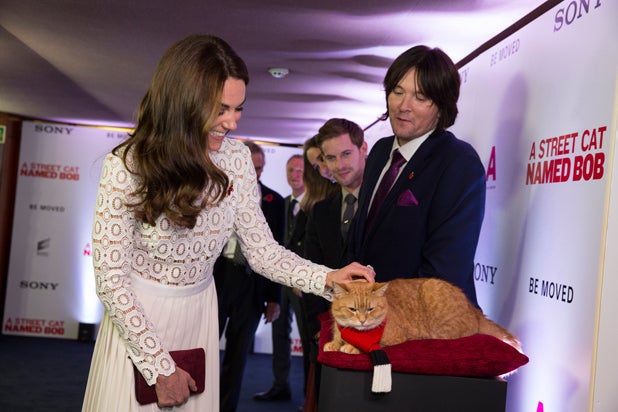 Sony Pictures Entertainment
Duchess of Cambridge Kate Middleton met the star of "A Streetcat Named Bob" at the film's world premiere in London on Thursday night. Luke Treadaway and Joanne Froggatt star in the film that comes to the states on Nov. 18. 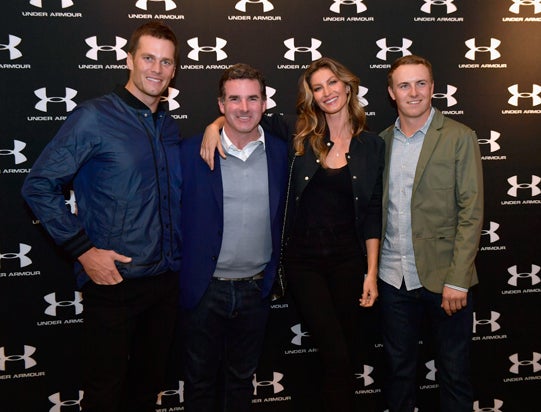 Paul Marotta/Getty Images for Under Armour
Tom Brady leveraged the Patriots' "bye" week to do some promo, opening up Under Armour's Boston Brand House with his wife Gisele Bundchen, the growth wizard Kevin Plank and major golf champion Jordan Spieth, the brand's face of golf. 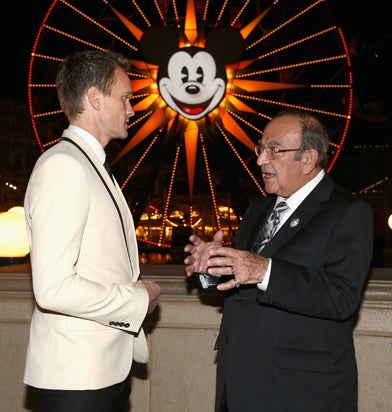 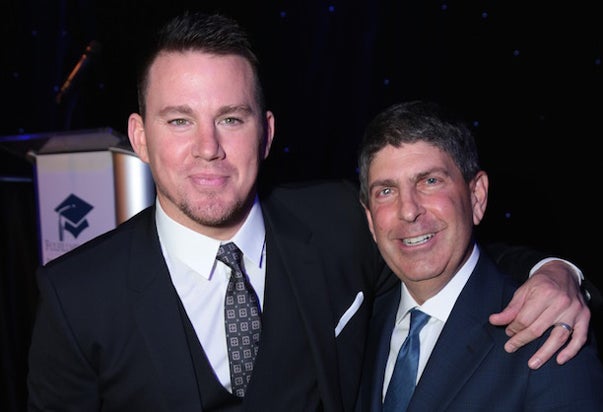 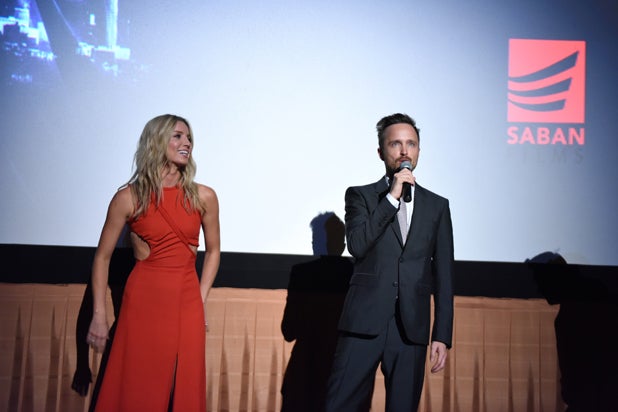 Vivien Killilea/WireImage
Annabelle Wallis and Aaron Paul introduced the "Gone Girl"-esque "Come and Find Me" at The Grove in Los Angeles on Thursday night, Nov. 3. The film marks the directorial debut of Joss Whedon's brother Zack Whedon. "We have such a shorthand," Paul said of working with Wallis as his on-screen girlfriend who vanishes. "The chemistry is already there." 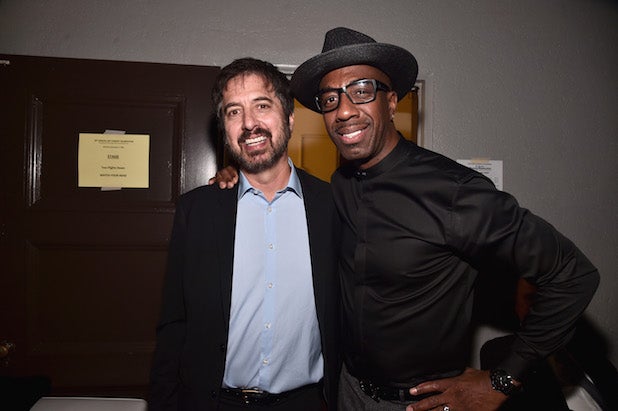 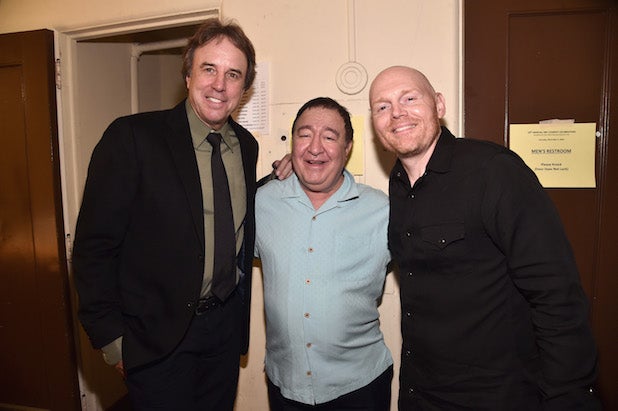 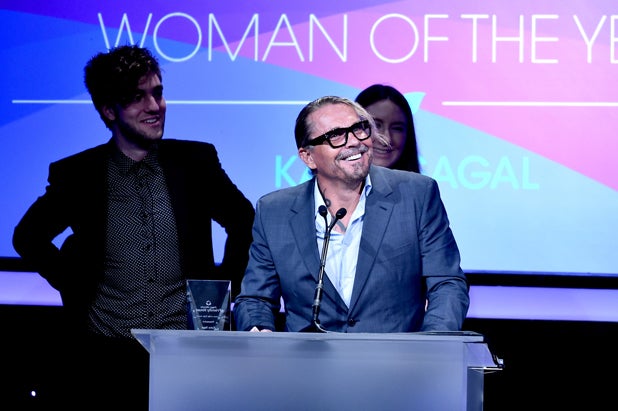 Vince Bucci
At an awards lunch for the female residential addiction recovery facility Friendly House at the Beverly Hilton Hotel, Kurt Sutter opened with a tongue-in-cheek joke about his daughter drinking with their nanny. Sutter's wife, Katey Sagal, has been sober for 30 years and was an honoree. Sutter said he had to start his remarks with something inappropriate or else Katey wouldn't believe his sincerity. 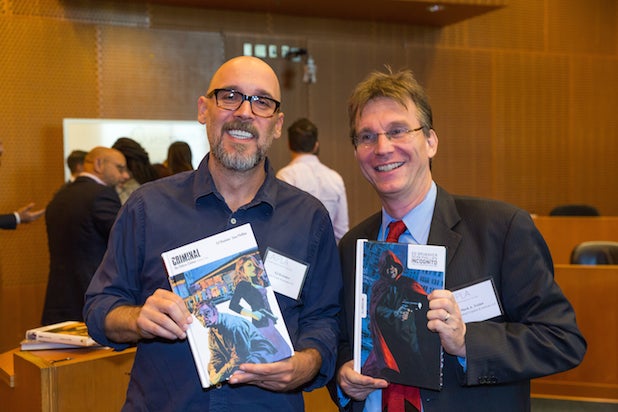 LAIPLA
Comic book author and "Westworld" writer Ed Brubaker (left),  gave a peek into the HBO hit's multi-year story preparations at Loyola Law School and the LA Intellectual Property Law Association's Techtainment 2.0 conference. "We were [in the writer's room] 7 days a week, 10 hours a day plotting out the whole story," he said. "The showrunners …had a big a plan for the show that went for years and years. By the time I was writing episode 4, we had already been there for 6 months talking about all this stuff." 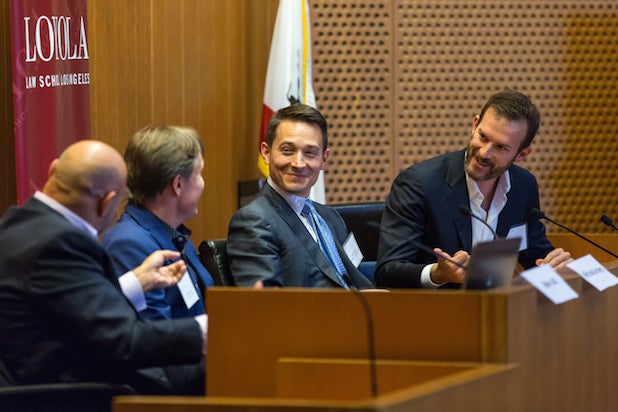 LAIPLA
The conference featured leading technology and IP practitioners wrestling with emerging issues like ownership rights of algorithm-authored music, the success of altered reality games like "Pokemon Go," and prognostications from USC's Todd Richmond, an expert in emerging technologies: "I'm willing to bet that cat videos on Youtube generate more money than the last 'Star Wars' movie did. I could be wrong, but I bet it's a horse race." Pictured here are Quinn Emmanuel partner Joseph Paunovich (2nd from right) and Jake Simon (far right), legal counsel for Red Bull TV discussing new issues in licensing digital content. 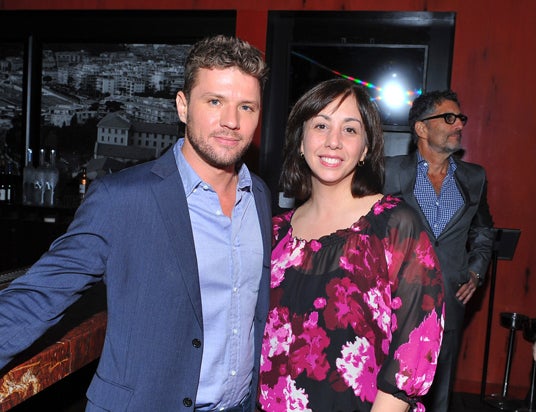 Vince Bucci/PictureGroup
Ryan Phillippe celebrated his new USA show "Shooter" at Riviera 31 at the Sofitel in West Hollywood. Here, he posed with TV Guide Magazine editorial director Nerina Rammairone, who put him on the cover of the current issue. 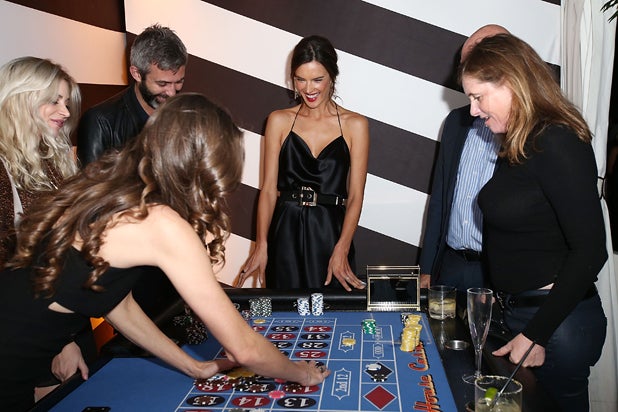 Joe Scarnici/Getty Images for W Las Vegas
The W is coming to Las Vegas, taking over and making over the LUX Tower at the SLS Las Vegas at the north end of the Strip. To get the buzz going, W threw a preview event at the W in L.A., where Alessandra Ambrosio hit the tables alongside Full Picture's Milan Blagojevic (left).
The essential source
for entertainment insiders