Justice, the French electronic producers behind “D.A.N.C.E.” and “We Are Your Friends,” played their final live show of the decade at HARD’s “Day of the Dead” festival in downtown Los Angeles on Saturday night.

They headlined the single-day outdoor concert in L.A. State Historic Park with a 70-minute set on a Coachella-sized stage. For “Dead,” the event returned after a six-year hiatus with festival heavyweight Insomniac taking over the controls. 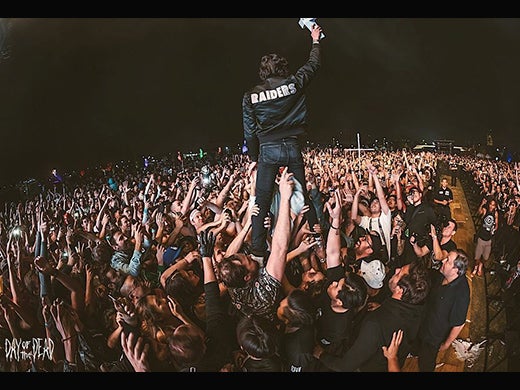 The revamped state park tucked between Chinatown and the Gold Line Metro moonlights by hosting concerts with a knack for saying “yes” to milestone events. Back in 2013, Swedish House Mafia’s farewell tour touched down there. Just this summer, Zedd launched a new tradition in the space with a 4th of July Eve mini-fest, “Zedd in the Park.” That one was also an Insomniac production, nurturing their footprint for large outdoor shows within the city limits after a tumultuous exit of their flagship Electric Daisy Carnival franchise from the L.A. Coliseum several years ago. 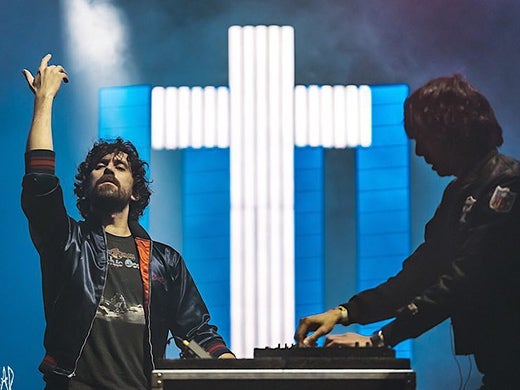 The show concluded Justice’s touring cycle for “Woman Worldwide,” a record and tour that began with hit “Safe and Sound” back in the early summer of 2016. Along the way they played big slots, like the Outdoor stage at Coachella 2017, but the duo remains scarce. You won’t find them at a Vegas nightclub. Their only two U.S. dates this year were both at multi-day, multi-genre festivals Austin City Limits and Life Is Beautiful. Their arrival on the HARD stage was a big get and surprise booking for the dormant franchise. 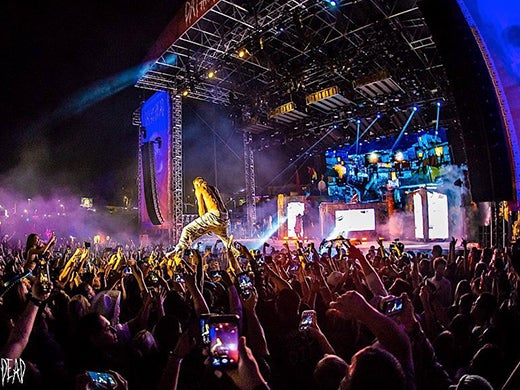 Augé and Rosnay’s relationship with HARD goes back far. They headlined the last “Day of the Dead” six years ago and also played on a tiny riser in a parking lot as part of HARD’s New Year’s Eve 2008 event, then taking place in the no-man’s zone of the pre-makeover arts district east of downtown L.A.

Also Read: Drake Just Broke The Beatles' Record for Most Top 10 Songs in a Year

Coming on five minutes early, without a muscular intro, hands to their hearts to show gratitude, the opening vocals of “Safe and Sound” turned the page on the festival and brought out a better side of the costumed audience. 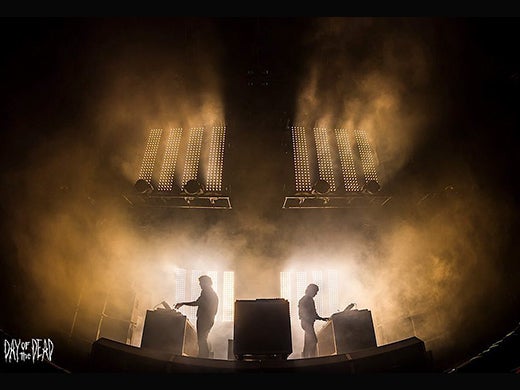 Unlike the “EDM DJs,” Justice do not use video visuals. It was music first (lighting second) at Day of the Dead. (Insomniac)

“Day of the Dead” was an all over-21 show, though the audience felt young. This crowd had no self-consciousness about wearing costumes and face paint three days past Halloween. (You wouldn’t see that in West Hollywood or Venice.) Here, the vibe was less about dressing up to mimic pop culture and more about devout adherence to the Mexican macabre motif, like attending a themed costume party.

With “Day of the Dead” back from the dead and doing brisk business in November (the box office was still moving tickets six hours after the gates opened), Insomniac and others continue pushing the seasonal boundary on outdoor festivals. Austin City Limits’ two weekends in October used to be the curtain call for the summer festival circuit. That’s no longer the finish line.

Next weekend, Tyler the Creator’s Camp Flog Gnaw will bring 40,000 fans to Dodger Stadium over two days. That event, produced by Goldenvoice, sold out in under 40 minutes this year. Insomniac is also adding to its drumbeat of almost monthly festivals with an upcoming video game and music hybrid gathering dubbed “Play.”