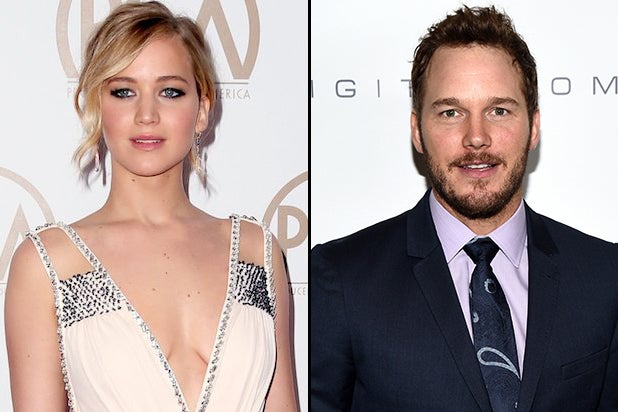 Jennifer Lawrence and Chris Pratt showed they have steamy chemistry on the big screen as the first footage of the two passionately kissing in this December’s sci-fi romance “Passengers” unspooled at CinemaCon in Las Vegas on Tuesday.

But before the footage rolled, Lawrence and Pratt showed the crowd of theater owners and exhibitors they have comedic chemistry, too, as they constantly cracked jokes onstage at Caesars Palace.

“I hope you’re getting drunk and having fun,” Pratt said in an apparently unscripted moment.

At another point, former movie theater employee Lawrence joked, “Movie tickets are half off!”

In her first film with Pratt, the Oscar winner plays a writer from New York who has joined a 120-year, maiden space voyage to Homestead Colony II. Pratt’s character, a mechanic, is also on the vessel, filled with more than 5,000 passengers.

The two are thrown together by chance when their sleeping pods malfunction and they wake up early — roughly 30 years into their epic journey. From two very different classes on the ship, their characters aren’t friends at first.

“He’s not one of the eggs Florentine type,” Lawrence noted.

“I figured I had 90 years to go so, you know, he broke me down,” he joked of her onscreen romance with Pratt.

The footage from director Morten Tyldum’s big-budget follow-up to “The Imitation Game” showed the Hollywood megastars grappling with their vexing situation, then later deciding to simply enjoy their time on the ship. They go on a fancy date, hit the pool, enjoy a movie, and then Pratt’s character lays it on her: “You’re the most beautiful woman I’ve ever seen.”

To that, Lawrence crawls up on a table, tosses aside their trays of food, and gets close enough to kiss him passionately. And yes, it’s hot — objectively speaking.

After more scenes of kissing between the two, panic sets in when it becomes clear their spaceship is doomed with mechanical troubles. Pratt is forced to strap on a space suit in a risky bid to save themselves and the thousands of others sleeping among them on the ship.

Will they evade eminent doom? Audiences will find out when “Passengers” hits theaters Dec. 21.