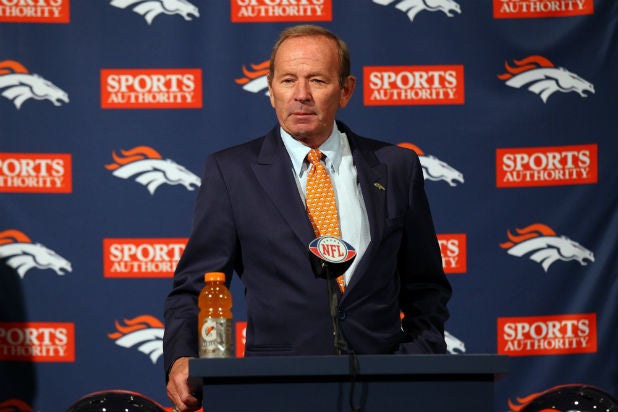 Pat Bowlen, the longtime owner of the Denver Broncos, died Thursday at his home in Colorado. He was 75.

Bowlen had been battling Alzheimer’s disease for years, according to ESPN, and was set to be formally enshrined in the Pro Football Hall of Fame in two months.

“We are saddened to inform everyone that our beloved husband and father, Pat Bowlen, passed on to the next chapter of his life late Thursday night peacefully at home surrounded by family,” his family said in a statement shared by the Broncos on Friday morning.

“His soul will live on through the Broncos, the city of Denver and all of our fans. Our family wishes to express its sincere gratitude for the outpouring of support we have received in recent years,” it continued. “Heaven got a little bit more orange and blue tonight. Pat Bowlen had a competitive spirit with a great sense of humor. As fun-loving as he was, he always wanted us to understand the big picture.

“We will forever remember his kindness and humility. More important than being an incredible owner, Pat Bowlen was an incredible human being.”

NFL Commissioner Roger Goodell also released a statement on Bowlen’s passing, saying: “Pat was driven by the will to succeed and his competitive spirit made him a great leader. We all will greatly miss him and his kindness, passion and wisdom.

“Pat had a deep love for the game of football, the Broncos and the City of Denver. In the 35 years he owned the Broncos, he helped deliver a remarkable 21 winning seasons and seven Super Bowl appearances, including three titles. Our league is also better because of Pat’s extraordinary contributions,” Goodell added.

Bowlen was introduced as majority owner of the Broncos on March 23, 1984, and made it clear throughout his ownership that he wanted the organization to be focused on winning and making a difference in the community, according to his bio on the team’s official website.

The Broncos averaged more than 10 wins per year during Bowlen’s 35 seasons, tying for the second-best overall winning percentage of all NFL teams (.596, 354-240-1) and posting a league-high 199 regular-season home wins.

Bowlen was born in Prairie du Chien, Wisconsin, in 1944. His father, Paul Dennis Bowlen, became a millionaire in the Canadian oil business and founded Regent Drilling, which is now owned by Pat’s brother, John.

After studying law at the University of Oklahoma, Bowlen became wealthy in his own right as a successful attorney in Edmonton, Alberta.

WWE Superstar, actor, former ESPYs host and rapper John Cena can now add Sports Illustrated Muhammad Ali Legacy Award honoree to his lengthy resume after receiving the award Tuesday night. In the midst of his press tour for "Bumblebee," Cena celebrated his philanthropic work with the Make-A-Wish foundation at the event hosted by Joel McHale at the Beverly Hilton in Los Angeles. Cena told TheWrap that he's flattered that WWE wrestlers are now seen as real athletes and sports personalities, not simply entertainers. But don't worry WWE fans, when he's done causing a buzz in Hollywood with the "Transformers" prequel, Cena will be back in the ring Dec. 26 at Madison Square Garden.