You don’t want to mess with Patricia Arquette anymore. For those of us who remember her as the wispy-voiced, quirky girl with the curves in “True Romance” and “Flirting With Disaster” (my personal favorite) a million years ago — that’s just not on the menu.

Most of us know she has become a champion for pay equality for women, and God bless her for that. But her new character on screen is a doughy, unattractive, ethically compromised prison guard on Showtime’s “Escape From Dannemora” who’s a different kind of breakthrough, as she told me last night.

“We got to see a different kind of person that we see in our life, that we see around us, but we really almost never see in Hollywood,” she said, walking out of the Golden Globes ballroom with her statue in hand for Best Performance by an Actress in a Limited Series or Motion Picture made for Television. “To be a 50-year-old of a certain body type who’s unapologetically sexual and actually feels OK about sex and being loved — that was really a gift.”

Also Read: Patricia Arquette Apologizes for F-Words That Got Her Bleeped During Golden Globes Acceptance Speech

Arquette plays the unsmiling Tilly, an employee at the Clinton correctional facility in the sleepy upstate New York town of Dannemora who becomes romantically entangled with one of the inmates (Benicio del Toro) to the point that she helps him and another inmate (Paul Dano) escape from the prison.

“It’s so liberating,” Arquette said of the role in the fact-based, seven-episode limited series, which Ben Stiller both directed and executive produced. Here’s my full conversation with Arquette as she took the measure of her win: 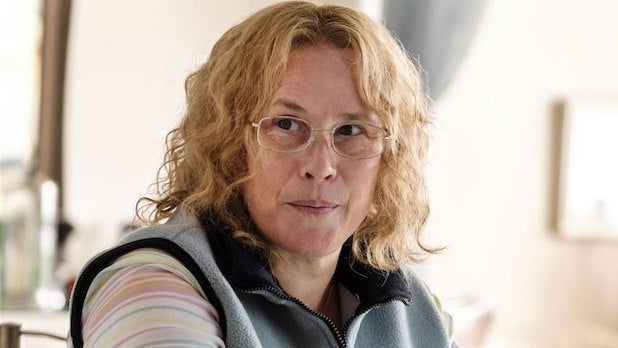 What about this character was important to you?

After 28 years in the business, I feel like the mantra that I’ve always heard over and over again — and I don’t know if it’s because I am a woman — I can do a great fighting scene and the feedback is, “That was great, but maybe a little too angry” or I do a great emotional scene and they say, “That’s great, but maybe it’s too painful, can you make her more likable?” Or, “She doesn’t look pretty when she cries.”

I never got that from Ben or the studio. They were like, “We don’t care if these characters are likable. We trust the audience. Let them see all these people with all these nuances. They can decide for themselves.” To be unsaddled from that need to be likable, to be pleasing in any kind of way I feel is more integral.

We got to see a different kind of person that we see in our life, that we see around us, but we really almost never see in Hollywood. To be a 50-year-old of a certain body top who’s unapologetically sexual and actually feels OK about sex and being loved. That was really a gift too. Sometimes people try to pretty it up or dumb it down. It’s so liberating. By Showtime and Ben Stiller. Both of them.

Was that character what was on the page?

They were like: This is what she looks like. They were all fine with that. This is Tilly and this is fine. The writers thought she was complicated and different. They saw her point of view. They thought she was difficult. And the actors were really supportive.

And of course it’s still very much men in positions of power, other than our DP [director of photography], who was a woman. But in general, these men are super supportive of this really complicated and different voice of a woman.

Also Read: 'Escape at Dannemora': Did Richard Matt Really Have a Photo of Hillary Clinton in His Jail Cell?

You aren’t playing the game anymore.

I’m excited about right now. Hollywood is starting to realize… Unfortunately for them, it’s like, “Wow, it actually pays big dividends to have diversity. Who would have ever known we would make a lot of money?”

But also it makes better movies. We’re kind of just beginning to explore other human beings. We’ve been so trapped in this model and concept for so long that I’m so excited about the new voices of tomorrow.