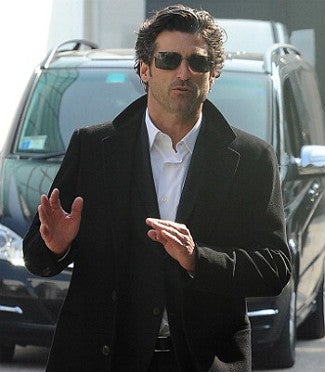 If this acting thing doesn’t work out for Patrick Dempsey, don’t worry; he has a backup plan.

“Grey’s Anatomy” star Dempsey gave an interview to Bon Appetit magazine recently, in which he admits he could see his recently acquired coffee company Tully’s peddling pot in a retail setting.

“Coffee is good for your mind — it’s basically a legalized drug,” Dempsey — who cops to a five-cup-a-day habit in the interview — opines. “The next step is selling marijuana, of course.”

Asked if Tully’s would ever get in on the weed-hawking action, Dempsey didn’t exactly shoot down the possibility.

“Great question,” Dempsey enthused. “There’s a business model there. You could present it in a beautiful, elegant way: a Michelin-starred coffee shop where you can get marijuana.”

Also read: Miley Cyrus: ‘You Know You’re a Pot Head When Your Friends Make You a Bob Marley Cake’

Oh, Dr. McWeedy; what were you smoking when you concocted that scenario?

Then again, he probably could use something to counteract those five daily cups of coffee.