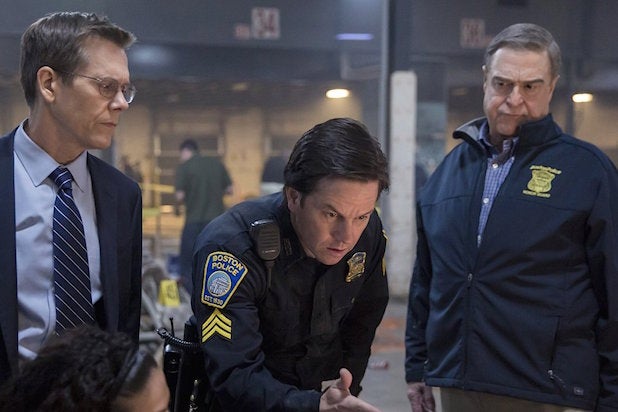 To compare, Mark Wahlberg’s other recent American thriller, “Deepwater Horizon,” grossed $860,000 from 2,400 locations at Thursday previews. “Patriots Day” will expand its theater count to 3,120 on Friday, as it enters the weekend with a certified “Fresh” rating of 80 percent on Rotten Tomatoes.

“Patriots Day” retells the manhunt for the bombers responsible for the attack on the Boston Marathon in 2013. It stars Mark Wahlberg, Kevin Bacon, John Goodman, J.K. Simmons, Michelle Monaghan and Alex Wolff. The film is directed by Peter Berg.

“Hidden Figures,” meanwhile, continued to build off its $22.8 million opening weekend with a Thursday gross of $1.97 million. Starring Taraji P. Henson, Octavia Spencer and Janelle Monae, the film will expand to 3,285 locations and has a 93 percent Rotten Tomatoes rating. Both “Figures” and “Patriots” are expected to have a strong showing in the four-day weekend, with box office experts projecting them to gross around $20 million.

On the genre side, the STX horror flick “The Bye Bye Man” opened to $400,000 with a weekend projection of $10 million. This is about how much the studio’s last January horror offering, “The Boy,” made in its opening weekend. “The Bye Bye Man” is being rolled out to 2,220 locations and currently has a 24 percent RT rating.

Other films out this week include Paramount’s family film “Monster Trucks,” which is projected by the studio to make $8 million to $10 million on its opening weekend against a $125 million budget. In September, the studio’s parent company Viacom reported a $115-million writedown for a movie believed to be “Monster Trucks.”

“Monster Trucks” stars the voices of Lucas Till, Rob Lowe, Danny Glover and Jane Levy. Directed by Chris Wedge, the film currently has a score of 26 percent on Rotten Tomatoes.

Ben Affleck’s “Live By Night” began its wide release by grossing $325,000 as it opens in 2,700 locations. The film is projected to make $10 million as it opens in 26 territories. Directed by Affleck, the film also stars Elle Fanning, Sienna Miller and Zoe Saldana and has a $65 million budget and a 31 percent RT rating.

Jamie Foxx’s action film “Sleepless” took in $410,000 in advance of an opening at 1,803 locations. The film features Foxx as a crooked Vegas cop on a vengeful crusade to find his kidnapped son. It currently has a 15 percent RT score.