The London Fire Brigade reports that all those trapped have been freed in a roof collapse at the Apollo Theater in London.

London Metropolitan Police is “not aware of any fatalities at this early stage,” according to the organization’s Twitter feed.

First responders treated 81 walking wounded and transported seven seriously injured patrons to local hospitals, according to the London Ambulance Service. Many of those minor wounds were head injuries.

“A section of the theatre’s ceiling collapsed onto the audience who were watching the show,” London Fire Brigade Kingsland Station Manager Nick Harding said in a press conference. “The ceiling took parts of the balconies down with it.” 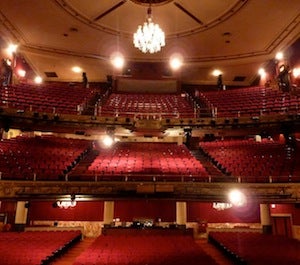 According to BBC News, an eyewitness said the “entire dome roof” fell on audience members sitting in the orchestra at around 8 p.m. local time, 12 noon Pacific Time.

The 112-year-old Apollo Theater, located in central London, was full for a performance of “The Curious Incident of the Dog in the Night-Time,” a play based on Mark Haddon’s book of the same name. About 720 people were in attendance.

“In my time as a fire officer I’ve never seen an incident like this. I imagine lots of people were out enjoying the show in the run-up to Christmas,” Kingsland said. “My thoughts go out to all those affected.”