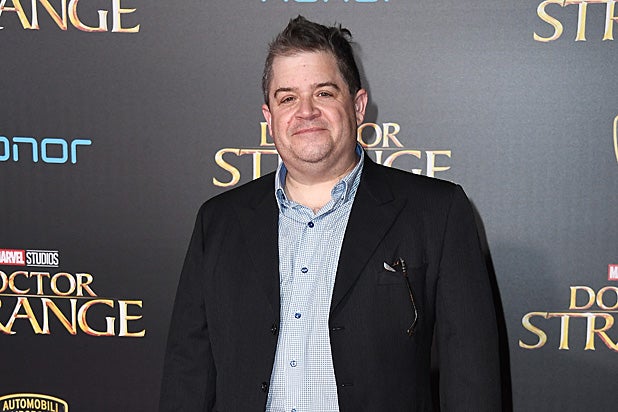 Patton Oswalt is coping with his wife’s sudden death by sharing his grief, and he had a captive audience at his comedy show this week.

On Thursday night the comedian performed his first standup show since Michelle McNamara died on April 21 at age 46, and 30 minutes into his set, he found the strength to talk about the loss.

“Six months and 12 days ago, my wife passed away,” he told the audience at the Beacon Theatre for the New York Comedy Festival, People reported, after opening with banter about the Chicago Cubs and Halloween.

“There’s no way to segue into that. It’s just my life and it’s kind of all-consuming. And it sucks. It sucks.”

Oswalt has been sharing his pain in Facebook updates over the last few months, but told his fans Thursday that sadly there is no such thing as a “healing journey.”

“A lot of the terminology that people use when you’re going through something like this is just ridiculous,” he said. “If I hear the term ‘healing journey’ one more time … It is not a ‘healing journey.’ It’s a ‘numb slog.’ It’s just, ‘Well, it’s the end of another day — guess I’ll do that tomorrow.’ It’s just a numb slog until you start feeling s— again.

The “King of Queens” alum also talked about how McNamara’s death has impacted their 7-year-old daughter, Alice.

Oswalt told the little girl about her mother’s death the following day, because “you can’t go, ‘Oh, your mom’s dead — sweet dreams,'” he said.

Alice is “handling the trauma amazingly. Way better than I thought she would,” he said.

But her father still questions why Michelle was taken from them. “That makes no f—ing sense,” he said. “No sense.”

While there has not yet been an official cause of death pending the coroner’s ruling, Oswalt told the New York Times last month that he suspects Xanax played a part in it.

“I have a feeling it might have been an overdose,” Oswalt said, noting that McNamara had taken Xanax before going to bed. “That’s what the paramedics there were saying while I was screaming and throwing up.”

McNamara, a graduate of the University of Notre Dame, was a true-crime writer and founded her own website, “True Crime Diary.”