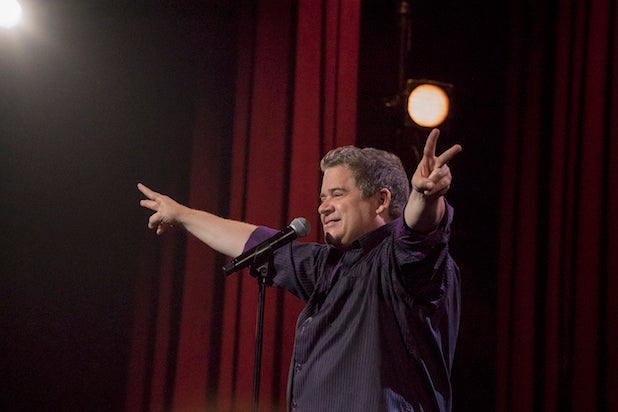 In “Patton Oswalt: Annihilation,” the comedian opens up about the death of his wife and how he dealt with his grief over the past year.

“I do draw on my real life [for my comedy],” Oswalt said. “I mean, I definitely draw on my emotions–definitely if I’m talking about the world, talking about politics or pop culture or just any kind of cosmic idea or philosophic idea. But then I also draw upon my real life if there’s something that happens to me directly that I think can be turned into an insightful, comedic [point].”

Oswalt, a noted pop culture connoisseur, said “pop culture failed me” after his wife’s sudden death in 2016. In the special, there’s a bit where he talks about superheroes and their seemingly impractical cemetery visits (always at night, in the rain). But as he recounts in the special, maybe they’re on to something.

Although superheroes failed Oswalt in helping to deal with his grief, he did tell us his favorite superhero: Spiderman.

“Only because Spiderman is the one superhero that is very, very–just in a blue collar working class sense–is the one that’s very, very aware of, like, economics and day to day hassles and how superpowers don’t necessarily fix that,” Oswalt said.

“He’s the one superhero that you could see going, ‘oh man I can’t afford a Venti latte, I could get a tall regular, then I’ll have enough for bus fare.’ That’s like a very real thing, and it really draws you in,” he added.

He also pointed out that the latest Spiderman movie, “Spiderman: Homecoming,” is the “first combination” of the superhero genre that exploded under the Obama era and the “struggles of the working class”-themed movies he sees coming out now during the Trump presidency.

Also Read: Patton Oswalt Says Daughter Saved Him From Being 'a Shut-in Alcoholic'

Which brings us to Donald Trump.

In the special, Oswalt says he can empathize with the president, who left a life of luxury for a job “he so openly doesn’t want to do.”

“You can empathize with a sh—y person,” he said.

Trump is “clearly” unhappy in his latest job as commander-in-chief, Oswalt says, “because he took the whole job out of spite, which I think is just kind of the fuel of his life, is all spite and revenge, is all he knows.”

“Annihilation” is Oswalt’s second Netflix special; “Patton Oswalt: Talking for Clapping” won him a Primetime Emmy Award for Outstanding Writing for a Variety Special in 2016. Oswalt told TheWrap he like working with Netflix because of the “why not feeling” at the company.

“When you get associated with Netflix, you’re associated with a certain kind of comedy, this very risk-taking–not just in the content but in the choice of Netflix itself–like, ‘oh let’s try this new person, let’s see what happens,'” Oswalt said. It doesn’t hurt that several of his friends, like Dave Chappelle and Amy Schumer, also have specials on the streaming platform.

Netflix is “curating” comedians in a way that turns the audience into comedy “connoisseurs,” he said.

You can watch “Patton Oswalt: Annihilation” on Tuesday, October 17 on Netflix.