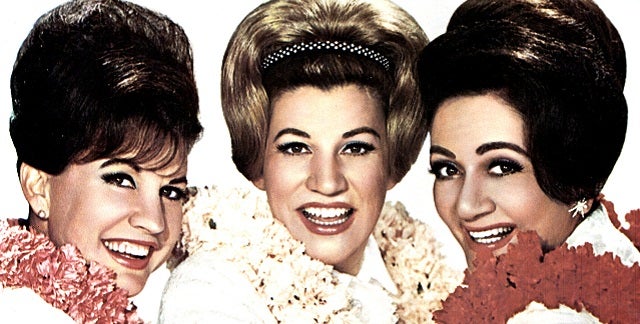 She was the lead singer for the trio, whose hits  — including “Boogie Woogie Bugle Boy” and  “I Can Dream, Can’t I?” —  helped cheer American Gis abroad and those on the home front  during World War II.

Andrews died of natural causes at her home in the Los Angeles suburb of Northridge, family spokesman Alan Eichler told the Associated Press.

The Andrews Sisters — which she formed with her sisters LaVerne and Maxene — recorded more than 400 songs and sold more than 80 million records. Their most well-know songs included “Bei Mir Bist Du Schoen,” “Beat Me Daddy, Eight to the Bar” and ”Rum and Coca-Cola.”

Patty Andrews was the group's most high-profile member, always centerstage and often jitterbugging to the tunes.

The sisters recorded with popular swing bands of the ‘40s, including those fronted by Benny Goodman, Glenn Miller, Jimmy Dorsey, Bob Crosby, Woody Herman, Guy Lombardo, Desi Arnaz and Russ Morgan. They had a hit — "Don't Fence Me In" — with Bing Crosby, and they also recorded with Dick Haymes, Carmen Miranda, Danny Kaye, Al Jolson, Jimmy Durante and Red Foley.

The Andrews Sisters’ popularity led to a contract with Universal Pictures, where they made a dozen low-budget musical comedies between 1940 and 1944. But their most well-known movie was at Paramount, 1947's "Road to Rio" with Crosby, Bob Hope and Dorothy Lamour.

They continued to tour until the death of LaVerne Andrews in 1967, but interest in the band took off in 1973, when Bette Midler had a hit with “Boogie Woogie Bugle Boy.” That led to the sisters appearing in a Broadway show “Over Here!” which ran for more than a year.

Both Patty and her sister Maxene continued to perform, occasionally in Las Vegas and as guests on TV shows. Maxene died in 1995.