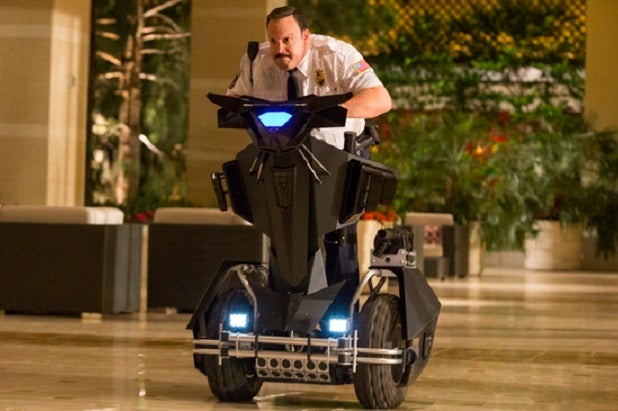 Universal’s action epic took in $8.2 million and put itself on course for a $25 million third-straight weekend win on the same day it topped the $1 billion mark at the global box office in its 17th day of release. That’s faster than any movie ever has, and the sequel starring Vin Diesel, Dwayne Johnson and Michelle Rodriguez has now grossed more than $280 million domestically and another $735 million from overseas.

Sony’s comedy sequel “Blart” took in $7.2 million in its first day and is heading for $22 million for the weekend. That would be under the $31.8 million opening of the 2009 original, but about $5 million higher than analysts and the studio had projected.

The PG-13-rated sequel, in which the buffoonish security guard with the name that sounds like a hybrid body function heads to Las Vegas, cost $30 million to make. So the solid start puts it on the road to a profit for Sony and producers Adam Sandler, Todd Garner and James.

Audiences gave it a “B-” CinemaScore. That’s just so-so, but it’s better than it did on Rotten Tomatoes. Not one of the 37 critics cited there gave “Blart” a thumbs up, and it has a zero rating. It received an “A-” from its under-18 target crowd, however.

“Unfriended,” the teen horror tale about cyber-bullying, was third with $6.7 million in its debut, and is on course for a $16 million first weekend for Universal. Produced by Blumhouse Productions for about $1 million, it was a financial win going in for Universal.

The R-rated chiller’s unusual presentation — most of the action takes place on computer screens — and high social media profile suggested it might break out, but it’s on pace to finish about where pre-release tracking had it. It received a “C” CinemaScore from typically hard-grading horror fans.

“Monkey Kingdom,” a Disneynature documentary, took in $1.5 million from 2,012 theaters Friday and is heading for a $4.5 million and seventh place in its first weekend. It received an “A” grade from audiences.

Just outside the top ten was “True Story,” a fact-based journalism drama starring James Franco, Jonah Hill and Felicity Jones. It brought in $690,000 from 881 theaters in its opening day and should finish just over $2 million for the weekend for Fox Searchlight.

“Child 44.” a thriller starring Tom Hardy and Noomi Rapace, managed just $227,000 from 510 theaters for Lionsgate on its first day. That projects to $722,000 over the three days for the film, which had its Russian release blocked by officials there who found its portrayal of that country offensive.

DreamWorks Animation’s “Home” was fourth with $2.4 million and heading for a $9 million fourth week that would lift its domestic total over $140 million. Next came Fox’s Nicholas Sparks’ adaptation “The Longest Ride,” which romanced $2.4 million Friday and is on the way to a $7 million second week Sony’s Will Ferrell-Kevin Hart comedy “Get Hard” took in $1.4 million and was sixth. It will make about $4.5 million this weekend, which would put it near $80 million after four weeks for Warner Bros.

The overall box office was running about 15 percent under the comparable frame last year, which looked a little like this one. “Heaven Can Wait” from Sony took in $22 million to finish second behind a blockbuster that won its third straight weekend, “Captain America: Winter Soldier.”