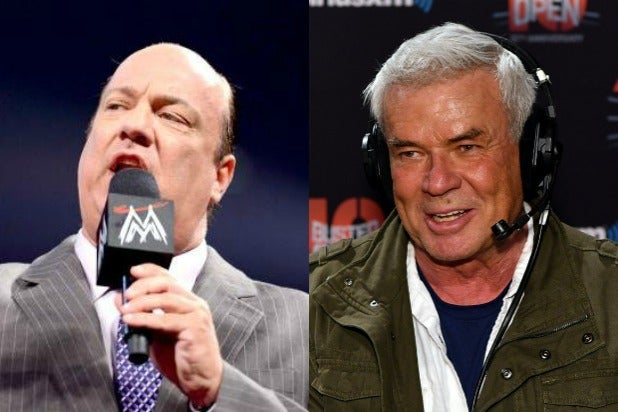 Paul Heyman and Eric Bischoff have been placed in charge of WWE TV, with the first running “Raw” as executive director and the second handling the same duties for “SmackDown Live,” an individual with knowledge of the promotions confirmed for TheWrap. WWE later sent out a press release announcing the moves.

Both the ECW founder and the former WCW president will report directly to WWE chairman and CEO Vince McMahon.

In their newly created executive roles, Heyman and Bischoff will oversee the creative development of WWE’s flagship programming and ensure integration across all platforms and lines of business, in WWE’s verbiage.

The weekly shows currently air on USA Network, though “SmackDown” is moving to Fox’s broadcast channel — and from Tuesdays to Fridays — this October. “Raw” will stay put on Mondays and at its longtime cable home.

Below are Heyman’s and Bischoff’s WWE bios. In addition to his many behind-the-scenes duties, Heyman plays the “advocate” to wrestler Brock Lesnar on-screen.

With more than 30 years of experience in the sports entertainment industry, Heyman served as president of ECW from 1993-2001, securing pay-per-view distribution for the company as well as a national cable television deal with TNN. After his time with ECW, Heyman joined WWE’s creative team and is widely credited with helping launch the careers of many current and former WWE Superstars.

Bischoff is a former WCW president and New York Times bestselling author. During his WCW career, Bischoff oversaw the signing of some of the biggest names in sports entertainment and helped create and develop the NWO storyline. He was also instrumental in securing a television deal for “WCW Monday Nitro” on TNT and “WCW Thunder” on TBS. After WCW, Bischoff co-founded Bischoff-Hervey Entertainment, a production company that launched TV reality shows and mobile games.