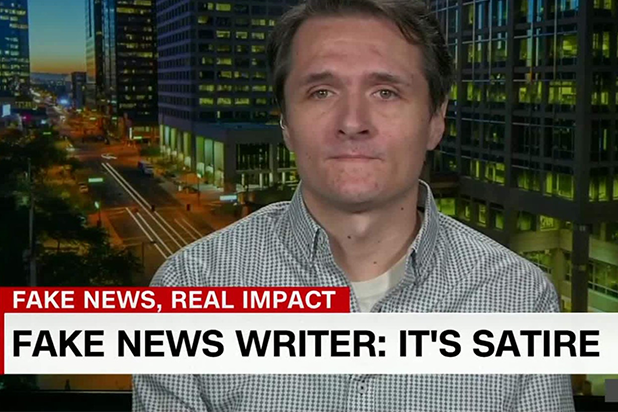 Paul Horner, a writer of “fake news” who claimed to influence the 2016 election with his widely discredited stories, was found dead outside Phoenix, according to the Associated Press. He was 38.

Maricopa County Sheriff’s Office spokesman Mark Casey told the AP on Tuesday that Horner’s body was discovered in his bed on Sept. 18.

The county’s medical examiner found no signs of foul play, Casey said, adding that Horner had a history of prescription drug abuse and that “evidence at the scene suggested this could be an accidental overdose.”

Horner’s brother JJ Horner posted a tribute on Facebook on September 22, writing that Paul Horner was found in their mother’s home in Laveen, Arizona, and that he died in his sleep.

Horner gained international attention during the 2016 presidential election for his widely circulated and wildly unsubstantiated stories on Facebook that were designed to intentionally rile people up.

He circulated a story that erroneously claimed President Barack Obama was gay and a radical Muslim, and another saying protesters were paid thousands of dollars to protest at then-candidate Donald Trump’s campaign rallies.

“All the stuff I write has a moral purpose of targeting things I don’t like in society,” he told the Arizona Republic in 2016. “Anybody who gets tricked by my stuff is people that I’m targeting, trying to make them change the way they think.”

Horner told The Washington Post last year that he thought Donald Trump won the presidency because of his fake stories because “his followers don’t fact-check anything.”

“They’ll post everything, believe anything,” he said at the time. “His campaign manager posted my story about a protester getting paid $3,500 as fact. Like, I made that up. I posted a fake ad on Craigslist.”