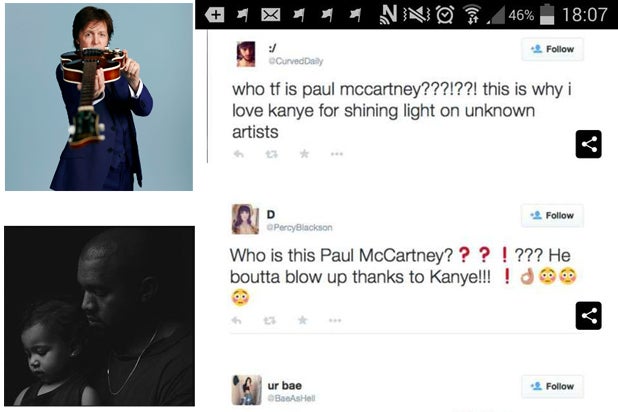 Paul McCartney opened up about his new chart-topping Kanye West collaboration on Friday, but he isn’t the only one tweeting about “Only One.”

“For any of you guys who were wondering what I was doing with @kanyewest,” McCartney wrote in a tweet that linked to the track. “Happy rocking new year!”

But a smattering of smart-alecs have been giving the McCartney social-media grief over the pairing, with many making jokes about how the rapper’s younger fans may have never even heard of the legendary rocker, nor his former band the Beatles.

“I don’t know who Paul McCartney is, but Kanye is going to give this man a career w/ this new song!!” wrote OVOJosh.

“Who the fuck is Paul McCartney?” added Theo_Sofianos. “This why I fuck with Kanye. He always trying to put on new artists.”

There’s a good chance many of the tweets were in jest, but some music fans have taken them seriously and are upset by the slighting of McCartney, who has helped sell over 100 million albums, cowrote with John Lennon one of the most famous songs ever in “Yesterday” and was even knighted for his contributions to the world of music.

“Kanye West did a song with Paul McCartney and people on Twitter are asking who Paul McCartney is and now I understand domestic terrorism,” wrote KimballBennion.

“The downfall of America’s youth has officially concluded with people not knowing who Paul McCartney is,” added DukeOfHoops.

Whether the people know him or not, McCartney and West’s collaboration “Only One” has taken off. An ode to the rapper’s young daughter North West, the song features West singing over McCartney’s soothing keyboard sounds.

The track was released on New Year’s Eve and already reached #3 on the iTunes charts.

"For any of you guys who were wondering what I was doing with @kanyewest … Here it is: http://t.co/nEE2ogONOR Happy rocking new year!"