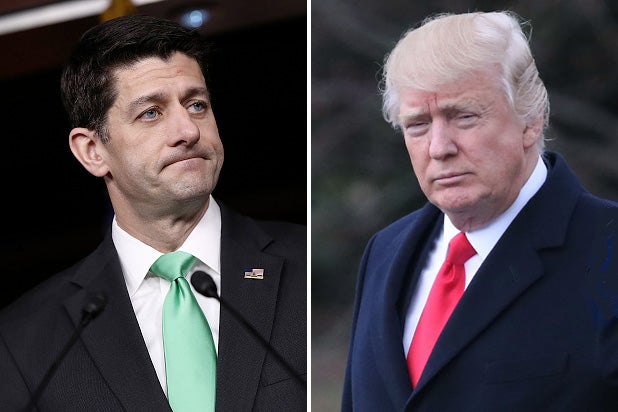 The GOP has pulled the Health Care bill that would have repealed and replaced the Affordable Care Act.

“You’ve all heard me say this before — moving from an opposition party to a governing party comes with growing pains and, well, we’re feeling those growing pains today,” House Speaker Paul Ryan said following the announcement.

“This is a disappointing day for us,” he added. “Doing big things is hard. All of us, all of us, myself included, will need time to reflect on how we got to this moment, what we could have done to do it better. … This is a setback, no two ways about it — but it is not the end of the story because I know that every man and woman in this conference is now motivated more than ever to step up on their game, to deliver on our promises.”

President Trump spoke from the Oval Office after Ryan’s announcement, saying that the health care bill fell short in the lead-up to the House vote because of no support from Democrats. “They weren’t going to give us a single vote,” the president said.

He went on to say that he is “open” to tackling health care again if “Obamacare” implodes. “If [Democrats] got together with us and get a real health care bill, I’d be totally open to it. And I think that’s going to happen. If it loses… Nancy Pelosi and Chuck Schumer… now they own Obamacare. They own it. They 100 percent own it.”

Trump added, “It’s imploding and will soon explode. And it’s not going to be pretty.”

With news outlets reporting that 27 Republicans in the House were solidly in the “no” camp and another four likely to follow, the outcome of the bill was in doubt from the get-go. As of Friday morning, the approval of the GOP health care plan was at 17 percent.

“Why would you schedule a vote on a bill that is at 17% approval? Have we forgotten everything Reagan taught us?” former Speaker of the House Newt Gingrich tweeted earlier. MSNBC calls it “a failure marked in the official congressional record.”

Next on President Trump’s agenda: a pivot to tax cuts and tax reform.