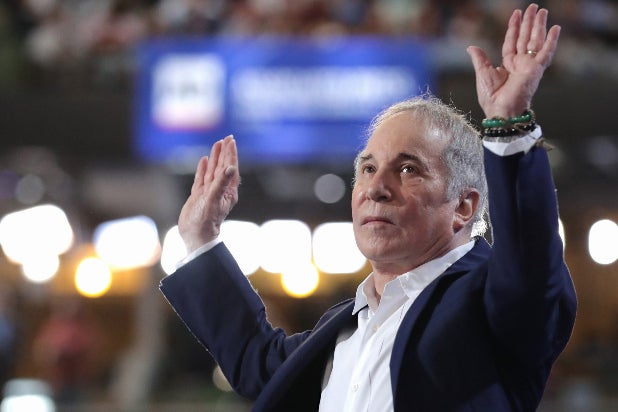 Paul Simon fans are rushing to his defense on Saturday after an op-ed in NBC News dragged the iconic “Bridge Over Troubled Water” singer-songwriter by saying he’d be nothing more than a “historical footnote” to Bob Dylan.

Writer Jeff Slate on Friday reacted to the news that Simon was the latest musician to cash in and sell his music catalog to Sony Music Publishing, following in the footsteps of Dylan when he sold his catalog for a reported $400 million to Universal Music Group.

Slate wondered why a musician famous for being a ’60s counterculture icon would now sell off the publishing to his art and most prized possession, a valid question for many artists like Neil Young, David Crosby, Ryan Tedder, Shakira, The Beach Boys and many more who have done the same. But in making his case, he took an unnecessary dig at Simon and others as though their contribution to rock music was lesser than Dylan’s.

“It’s hard to imagine that in 200 years or more — when historians dig into the culture of the late 20th century — anyone but the Beatles and Bob Dylan will be worth more than a passing mention,” Slate wrote. “That means Young and Joni Mitchell and Bruce Springsteen and, of course, Paul Simon — all giants in their day — will be no more than footnotes, at best, to Dylan and the Beatles, if only because history is a blunt instrument and doesn’t have room (at least not in the broadest sense) for subtlety.”

He went on: “Paul Simon, who is essentially an also-ran ’60s icon on a centurial or millennial scale, is making a rational calculation. He’s cashing out while he can in the hope that the broader commercialization of his greatest works might just secure him a better place in history — if even temporarily — no matter how sad an indictment of our times that may be.”

That, of course, set off lots of fans who love “The Boxer,” “Mrs. Robinson” and “Graceland,” among countless others.

“More than harsh, the writer’s view of history is simply profoundly inaccurate,” rocker Steven Van Zandt wrote on Twitter. “The ’60s was a Renaissance period that will be studied for hundreds of years to come. Dylan, Lennon/McCartney, Jagger/Richards, and yes, Paul Simon, et al, were our Beethovens, Mozarts, and Tchaikovskys.”

“Paul Simon is an International Treasure who has brought us all delight for decades. Not the same thing one can say about NBC News,” “Monty Python” comedian Eric Idle added.

To the writer’s credit, there is something to be said that all rock music might one day in the distant future become a footnote. Rock critic and culture writer Chuck Klosterman wrote in his book “But What If We’re Wrong” that in some cases, all musical genres have been simplified down to just one artist, such as Sousa for marches or even more recently like Bob Marley for reggae. And, in the book, he makes a case for Dylan over The Beatles as an example of an artist who could be the face of rock centuries from now.

But in defense of why Simon would want to sell, TheWrap has examined the trend of classic rock stars taking advantage of a wave of music catalog sales in recent years, responding not just to a rise in the amount they’re being sold for but the peace of mind that knowing their music will be cared for generations from now.

In defending Simon, however, many online have slammed Bob Dylan as not being a very good singer… and that’s something we won’t abide either.

Check out some of the online reaction below:

More than harsh, the writers view of history is simply profoundly inaccurate. The ‘60s was a Renaissance period that will be studied for hundreds of years to come. Dylan, Lennon/McCartney, Jagger/Richards, and yes Paul Simon, et al, were our Beethovens, Mozarts, and Tchaikovskys. https://t.co/Jm8qdEIrIr

Paul Simon is one of the greatest American singer/songwriters of all time. This piece tries to paint him as an “also-ran.” Not cool. https://t.co/mDSMO2kqQH

Paul Simon is an International Treasure who has brought us all delight for decades. Not the same thing one can say about NBC News…. https://t.co/e9v4eA6uyr