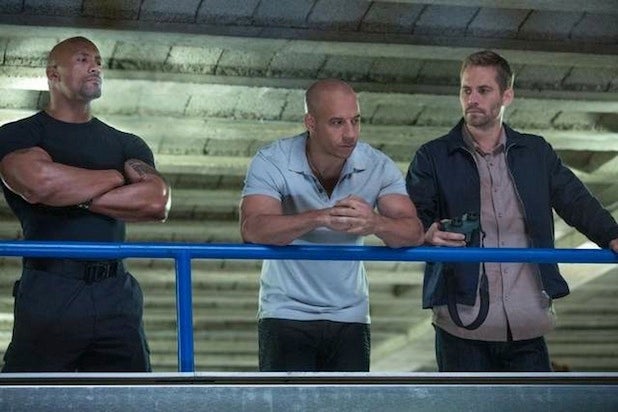 Dwayne “The Rock” Johnson broke his silence Saturday night on the death of “Fast and Furious” co-star Paul Walker, who died several hours earlier in a car crash during a charity event in Santa Clarita.

“All my strength, love & faith to the Walker family during this heartbreaking time,” Johnson tweeted. “We find our strength … in his light. Love you brother.

All my strength, love & faith to the Walker family during this heartbreaking time. We find our strength.. in his light. Love you brother.

There was still no word Sunday from series regular Vin Diesel, who’s more of an avid Facebook user whose account had not been updated since the day before Thanksgiving. Several media outlets picked up an Instagram account that purports to be Diesel’s with a statement, but TheWrap was later told that the account was a fake.

Johnson reinvigorated the “Fast” franchise in 2011 as the quasi-villain Luke Hobbs; previous installments “Fast and Furious” and “The Fast and the Furious: Tokyo Drift” were running out of gas, but “Fast Five” opened to $86 million and made $626,137,675 globally, putting the brand very much back on track for Universal. Walker appeared in six of the franchise’s films, skipping only “Tokyo Drift.”

Meanwhile, “Fast & Furious 6” co-star Ludacris became the first co-star to offer his thoughts on Saturday in the wake of Walker’s death:

Your humble spirit was felt from the start, wherever you blessed your presence you always left a mark,… http://t.co/nUiPPIU9Bb

And “Fast and Furious 7” director James Wan also weighed in, tweeting that he was still in shock:

I am so beyond heartbroken right now. I can’t process anything.