Is anybody better at playing a dotty, preoccupied genius than Tobey Maguire? His brow’s worried furrows and unsettlingly inward-gazing eyes made him convincingly uncanny as the natural born writer in “Wonder Boys,” and he gave even Spider-Man a visionary gleam.

In “Pawn Sacrifice,” Maguire has a tougher nut to crack: Bobby Fischer, the chess champ who became a deranged recluse advocating “Death to America” and the deportation of all white Americans to Europe. Chess masters are often a bit out there: Fischer’s 1972 Iceland world championship rival Boris Spassky (played with magnetic savoir faire by Liev Schreiber) really did make officials X-ray his chair to prove Fischer wasn’t using it to beam radiation into his brain, and World Chess Federation president Kirsan Ilyumzhinov explained that chess was invented by aliens in yellow suits who took him for a day-long spin in their spaceship in 1997. That’s why Earthlings all have the same chessboard, you see.

Even by chess standards, Fischer was nuts. He believed Bill Clinton stole millions’ worth of Fischer’s memorabilia from a California storage room, all part of a global conspiracy of Jews (and “secret Jews” like Clinton) out to get him. “We’re Jewish!” protests his bewildered sister Joan (movingly played by Lily Rabe), clutching a dozen of Bobby’s anti-Semitic letters, desperate to get him out of the global media spotlight and onto a shrink’s couch. Shrink? This guy wouldn’t trust a dentist not to put transmitters in his molars.

Edward Zwick, a director who loves to mine history for stories that are logical to a fault, puts Fischer’s story in the context of that intercontinental chess match known as the Cold War. Hailed as a genius at 14, emancipated from his Marxist ex-Russian-resident mom (a cool-eyed Robin Wiegert) at 16, Fischer gets recruited to represent America by Paul Marshall (Michael Stuhlbarg), the Rolling Stones’ proudly patriotic attorney who wants the kid to single-handedly humiliate the Soviet Empire. 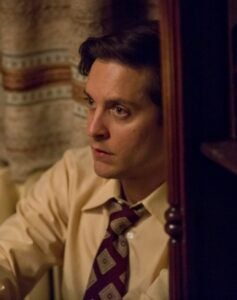 “We lost China, we’re losing Vietnam, we have to win this one!” says Fischer’s mentor. Kissinger calls Fischer to urge him to get back in there and win one for the Free World. Ever since Marx (reportedly a sore loser), chess was an obsession with Communists, and Russians had a lock on the championships until Fischer interrupted their perpetual victory parade like a potty-mouthed alien from Brooklyn.

“Pawn Sacrifice” is intelligent, absorbing, never boring, and skillfully tense when it should be, but it’s not one of Zwick’s genius flicks. The drama is opaque and internal, unlike the Civil War backdrop of “Glory.” When a scrum of annoying reporters demands that Fischer explain how he managed to lose one game, he snaps, “Would any of you even understand?”

The movie doesn’t help us understand what went on in Fischer’s mind, or how each game is going. When somebody says Fischer’s victory is “unprecedented in the history of chess…no one seems to be able to decipher what he does,” the audience can relate.

We certainly can relate to the people involved, and the little, charged emotional moments Zwick has been sensitively dramatizing since “thirtysomething.” He’s good at bringing us into the heart of Fischer’s family and friends, but his hero’s heart remains unknowable, even when Maguire expertly makes us feel both its heat and its chill. Screenwriter Steven Knight is better when his director has a touch of philosophical madness — as when David Cronenberg directed his “Eastern Promises” screenplay — as opposed to Zwick’s thoughtfully realistic rationality. And it’s just plain hard for a camera to peer into the head of a chess master, whose lucubrations mean too much to fit onscreen, or a lunatic, whose thoughts are meaningless. Their worlds are as self-contained as a black hole.

Both HBO’s “Bobby Fischer Against the World” and Steven Zaillian’s “Searching for Bobby Fischer” made for terrific drama, so chess can’t be an impossible subject. Maybe Zwick and Knight are too sane, delicately creating a bread-crumb trail of motives for a mental illness that may not really have had psychological underpinnings. It’s not that Zwick made any fatal moves; even the film’s worst blunder — badly underexplaining Peter Sarsgaard‘s character, Fischer’s old chess buddy and trainer, now a priest reminiscent of William H. Macy in “The Sessions” — leaves the cleric a vivid presence. It’s just that you can’t figure out where he’s coming from or what he’s doing there.

I know that when I re-watch “Pawn Sacrifice,” it won’t be for the foregone conclusions of Fischer’s ascent and death spiral, but instead to see the acting championship bout between Tobey Maguire and Liev Schreiber. They’re masters playing masters playing.