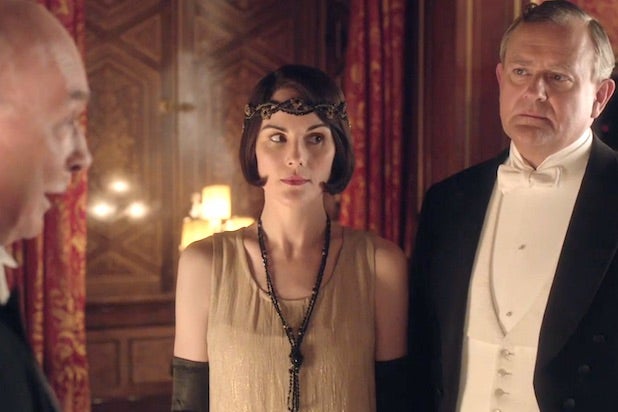 Spoiler alert: Do not read on if you haven’t watched Sunday’s Season 5 finale episode.

PBS’s “Downton Abbey” ended its fifth season on Sunday, tying up some storylines and seeding new ones for the upcoming sixth season.

During a shooting trip with Rose’s (Lily James) new in-laws, the upstairs and downstairs family members combined forces to show a mean butler that it wouldn’t let anyone discriminate against Tom (Allen Leach). And in the end, Rose won over her stern father-in-law. Along the way, both Mary (Michelle Dockery) and Edith (Laura Carmichael) met possible new suitors.

Later, a Christmas celebration with the Granthams would serve as a touching sendoff for Tom, as well as a touching reunion for Bates (Brendan Coyle) and Anna (Joanne Froggatt), who have been embroiled in a murder investigation. Plus, Carson (Jim Carter) and Mrs. Hughes (Phyllis Logan) finally admitted their feelings for each other and got engaged.

TheWrap spoke with Gareth Neame, the executive producer of “Downton Abbey” and managing director of Carnival Films, which produces the series, about Sunday’s season finale and what to expect going forward.

TheWrap: Was there a theme that you wanted to get across on the finale?
Gareth Neame: It has a particular function to play when it runs in the UK, of course. We have a time lag between the rest of the season and then we hold this episode over for Christmas day, which in Britain is the No. 1 TV-watching day. No one goes to the movies here on Christmas day, everyone stays home and watches television. So, you want to try and get in some of the festivities that people are enjoying in their own homes. That’s why we end the episode with the Granthams celebrating their Christmas. We also tie up some of the stories of the year, whether that’s Violet and her story, or whether that’s Anna and Bates, Carson and Mrs. Hughes, that sort of thing.

There were some very fun capers during the stay with Rose’s in-laws, which ended in good news for Rose.
It was a great way to show Aldridge that his son has married a very smart girl, who he’s going to have a very good relationship with. She certainly knows where the skeletons are buried now, so she’s safe.

How about Mary and Edith’s love lives? Have we been introduced to new romances?
Well, yeah, we have to see. I mean certainly they both met some guys, so we’ll have to see what happens next.

There was a part of me that doubted the show would actually let Tom leave. Will we see him at all again in the next season?
You will have to wait and see I’m afraid. But, I think everything Tom has been saying since Sybil’s death about he’s being marooned in this no man’s land between the two tribes of below stairs and above stairs and it’s been very, very uncomfortable for him. And, he has this need to go to the New World and make his own life. And, it’s definitely something he’s got to do.

The murder trial that haunts Bates and Anna doesn’t seem like it’s resolved. What can you tell us about how that continues into the next season?
There’s a nice tease at the end of this episode where he returns and they get to spend Christmas night together. It’s very moving, I think. But, their problems are far from resolved. And, obviously, as we go into the new season we will have to see how that develops.

Can we expect Carson and Mrs. Hughes’ wedding on the next season?
Yeah, I think we should predict a wedding to happen. But on this show, we have a history of not delivering weddings in the way that you’d expect. Who knows? A lot of proposals don’t end up in weddings. I hope that we’ll see Carson and Mrs. Hughes tie the knot.

Is there going to be a time jump before the next season?
Traditionally, there’s a few months that lapse between seasons, so that when you come into the new season and there’s already some history that the audience doesn’t know about.

Will there be new inventions or advanced technology spotlighted on the next season?
Yes, there definitely will be. I won’t discuss what they are, but it’s quite an intrinsic part of the show. What we’re always trying to demonstrate is that these people are more like us than they are different to us. They are living in a hugely technological age just as we are today. They had massive new inventions introduced that they were struggling to get their heads around. And just as for us today, each new gadget that comes in Mrs. Padmore worries that it’s going to put a human being out of a job. And that’s exactly the same as the world we live in. They’re going through just the same thing we are, except in their case it’s a telephone or a refrigerator.

How many more seasons does “Downton Abbey” have in it?
These things always have a shelf life. We always try to judge that properly. I’ve said before that we made the fifth season, we’re now shooting Season 6. We won’t be there in Season 10, so somewhere in the next few years. We’d like to judge when the time feels right.

I feel like “Downton Abbey” has really launched a new wave of nighttime soaps. I actually believe that Fox’s “Empire” is very similar in a lot of ways. Do you believe “Downton Abbey” had something to do with that trend?
Yes, I do. I think we’ve demonstrated that there’s an appetite for this kind of drama. I think it was always there. It just sort of fell out of fashion.

Two... servants (?) are in mourning because someone has died. This is that show where people die, right?
View In Gallery