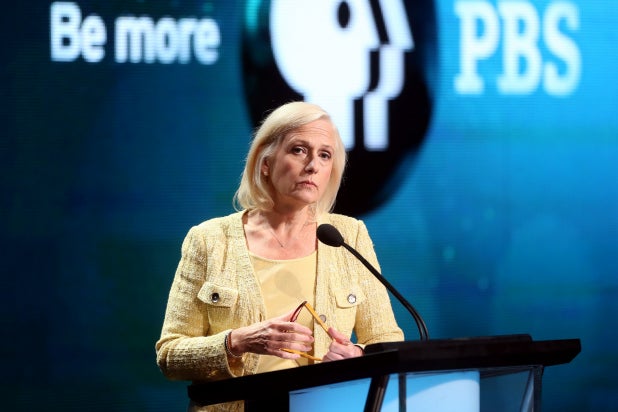 Considering the fact that PBS is funded in part by like viewers like you, President Paula Kerger knows she needs to use some of those dollars to reach more viewers like — and unlike — you.

To do so, Kerger touted her channel’s embrace of a “wide variety” of platforms at Tuesday’s Television Critics Association panel, noting that she understands the network’s need to be readily available to more people than it currently is. Still, funding is an issue, and Kerger acknowledged her job to “carefully steward” that money.

While navigating Public Broadcasting Services finances may be complex, the end-goal is simple: “Wherever people are going for content … we are there,” Kerger said.

They’re not there yet. Part of the challenge with connecting to audiences has been the TV schedule itself, Kerger acknowledged, which is why they must reach to other platforms and providers, and allow for more time-shifted viewing.

That said, Kerger is shocked by how many people still watch breakout hit “Downton Abbey” in its Sunday first-run timeslot.

“It is surprising to me … that people still are organizing Sunday nights so that they can watch the program the same time that their friends, their family [are],” she said. “There is a lot to be said about collective viewing.”

On the subject of their big hit, Kerger spoke of the decision to continue premiering “Downton” in January. There’s something about the national darkness and regional coldness of the month that lends itself to the feeling of the British show, she explained. Season 5 premieres in America on Jan. 4.

The success stories of imported shows such as “Downton” and “Sherlock” have also changed the way that PBS sees its potential audience. They can no longer afford to skew super-young — PBS has a strong pre-Kindergarten space — or older, with programming such as the upcoming Ken Burns documentary on the Roosevelt political dynasty. The network even plans to target teenagers with certain aspects of its Digital Studios arm.

Plus, it has a show called “Sex in the Wild” now, which —  while science-based — doesn’t sound at all like what one would consider a “PBS show.” “I think there’s a big mistake that people aren’t interested in smart content,” Kerger explained, while admitting the salaciousness of the title helps sample viewing.

Of the changes going on at PBS, Kerger concluded, “I think this is really our most exciting time.”