Daphne Maxwell Reid and Vernee Watson-Johnson, who played Aunt Viv and Viola “Vy” Smith, respectively, on the original “The Fresh Prince of Bel-Air,” are heading to Peacock’s “Bel-Air” as guest stars.

Reid and Watson-Johnson will both appear on the March 24th episode of the streaming series inspired by the original ’90s comedy. In the episode, Reid will play Helen, while Watson-Johnson is playing Janice. Both women are members of the Art Council Board of Trustees.

Peacock released first look photos of the actresses in the new series Monday.

“Bel-Air” is a one-hour drama series on Peacock, spanning 10 episodes. It offers a new take on “Fresh Prince,” showing main character Will’s “complicated journey from the streets of West Philadelphia to the gated mansions of Bel-Air. As these two worlds collide, Will reckons with the power of second chances while navigating the conflicts, emotions, and biases of a world far different from the only one he’s ever known.” 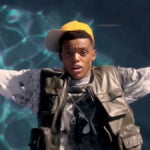 T.J. Brady and Rasheed Newson  are co-showrunners and EPs. Morgan Cooper is an EP, co-writes and directs.