Despite “Peaky Blinders” being centered on a gang in the 1900s with razor blades sewed into their caps, it’s the women – both on and off the screen – who are the sharpest of the bunch. Leading the pack is executive producer Caryn Mandabach, whose company Caryn Mandabach Productions owns and operates the Peaky Blinders IP. “I’m the studio, as we would say in America…. Pretend I’m Sony” she told WrapWomen during a recent Zoom interview.

But being the boss is a double-edged razor. On one end, Mandabach gets to oversee exciting projects like partnering with Bushmills Irish Whiskey on a special Peaky Blinders recipe. On the other, Mandabach must always keep her business cap on – no matter how tough the situation.

On April 16, 2021, during the production of Season 6, “Peaky Blinders” star Helen McCrory, who played Aunt Polly, passed away after privately battling cancer. Her tragic death presented Mandabach and showrunner Steven Knight with a narrative challenge. “It was the worst thing ever…. She was a friend,” Mandabach said. “There’s a separate thing between how you feel about a person and how you feel about the character.” 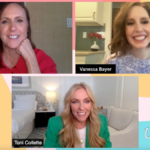 According to Mandabach, Knight had to pivot the storyline entirely because the script was already written with Aunt Polly included. “We were beginning to shoot. The whole thing was a giant mess, bad, like scheduling problems. Awful,” said Mandabach.

In the end, it was Knight who made the final call to open his sixth season with Aunt Pol’s funeral and then have her son Michael (Finn Cole) avenge her death. “[It] was as smartest choices I’ve ever seen anybody make,” said Mandabach, praising Knight’s sensitivity to McCrory’s mourners and friends, which included everyone involved in the show.

Throughout the filming of this final season, the entire production rallied together to keep the memory of the award-winning actress alive. According to Mandabach, this included pasting her face on the clapper, putting her wardrobe in a safe and being there for each other. “We laughed together, we cried together,” said Mandabach.

Luckily the team stayed strong throughout the filming of Season 6, which included delivering a bombshell finale centered around redemption. How can you redeem someone like the main character Tommy (Cillian Murphy) – someone who has killed innocent children and women – without his voice of reason, Aunt Pol?

For starters, the showrunner had Tommy not only burn down his house to build public housing, but he also refrained from killing the doctor who falsely diagnosed him with terminal tuberculoma.

“It’s inspirational,” she added. “People who watch it understand it.”

In the final moments of the series finale, Mandabach and Knight focus in on three aspects of Tommy’s character – his “head, heart and balls.” While the closer shows Tommy’s caravan burning, the music puts audiences inside his head, the pictures of his happy childhood show his heart and the picture of Grace is his balls. As Tommy rides off into the sunset, he is ready for a new way of life. Aunt Pol would be proud.

Season 6 of “Peaky Blinders” is now available on Netflix.

View full view with with Mandabach up top.